New wheels on my wagon

For my sins, I usually drive a twelve year old Ford Fiesta that I acquired three or four years ago. It’s the Titanium model and was originally supplied with 16″ alloy wheels and low-profile tyres.

There seems to be quite a lot of criticism of this combination of wheels and tyres online (as well as a few other Ford fitments involving low-profile tyres of a similar era) in that the wheels are very susceptible to damage, from potholes for example. The problem seems to be that the wheels aren’t capable of withstanding the force of the impact with a pothole which is all too easily transmitted to them because of the low profile of the tyre. Once damaged the wheels can be impossible to balance and may not be repairable. “Don’t drive into potholes then!” is the obvious response to the issue, but living in an area where there is no street lighting and road maintenance doesn’t appear to be a major priority, and where roads are often sufficiently narrow that large oncoming vehicles such as lorries and tractors mean that one is forced right to the edge of the road means that avoiding them all is quite tricky.

At my last MOT I was warned that there was damage to two of the wheels which was consistent with the fact that I’d been noticing some vibration in the steering above 60mph (around here there are few roads where it’s possible to go even that fast), so I decided I’d look at replacing them, particularly as the tyres were worn close to the limit so I could get a new tyre fitted to a new wheel.

New wheels turned out to be about £200 each from Ford, though I found one dealer selling them online for £150. Obviously I’d have the cost of the new tyres on top of that, and I’d still have the risk of having to replace more in the future because the cause of the damage wasn’t going to go away.

After more searching online I decided that a better solution would be to fit the 14″ alloys that are standard on models in lower spec. versions of the same car, and standard tyres which should better cushion the wheels from any bumps. In the end I managed to find four of these at a vehicle recycler’s: 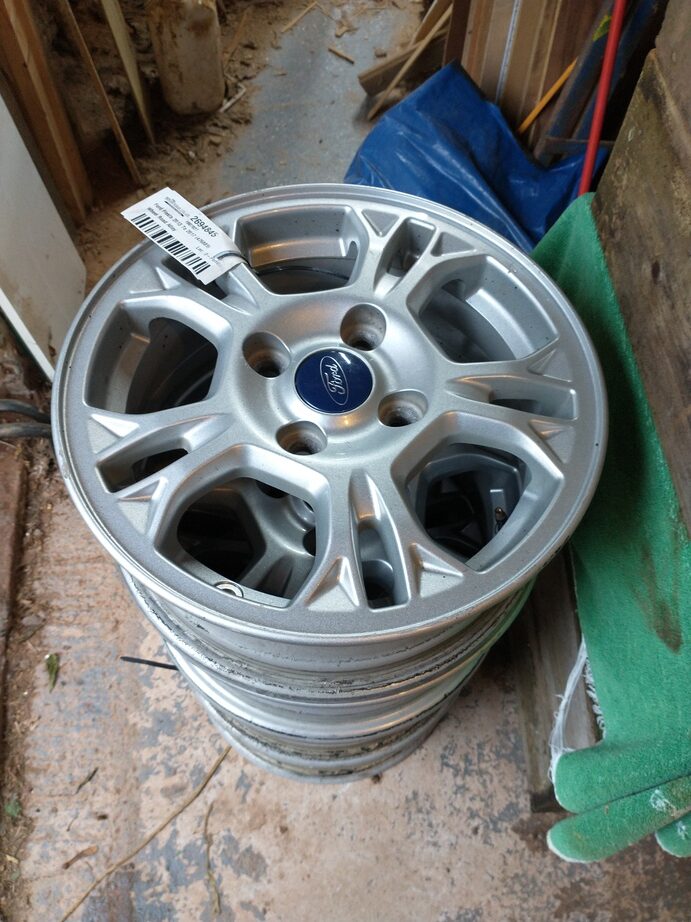 They were fitted to Fiestas of the same age as mine. The part number appears to be DA6J1007BB, and they take a 175/65 14″ tyre rather than the 195/45 on the original 16″ rims. The difference in the rolling diameter of the wheels is a fraction of 1% as far as I recall, so the change doesn’t even affect the speedometer reading noticeably.

Having fitted them I’ve found the ride to be more comfortable and quieter. It’s also made my insurance a tiny bit cheaper. And one further bonus is that I could buy a fifth and carry it as a full-size spare in the boot which can’t be done with the 16″ rims because the extra width means the wheel sticks up from the wheel well above the floor of the boot. Possibly the only downsize is a slight decrease in braking ability, but I hardly drive it like I stole it, so that’s really not a problem.

This entry was posted in Random and tagged alloys, damage, ford fiesta. Bookmark the permalink.