It’s been a grey and wet day today, so I chose not to do anything out in the open. I did however transplant my first batch of radishes (sown 13th February) and peas for shoots (sown 9th February) into the polytunnel. The radishes could probably have gone outdoors under fleece, but the ground is so wet at the moment that I didn’t see the point.

The main plot is starting to look rather sad and bare right now as we come to the end of the winter vegetables without having much that’s replacing them right now. 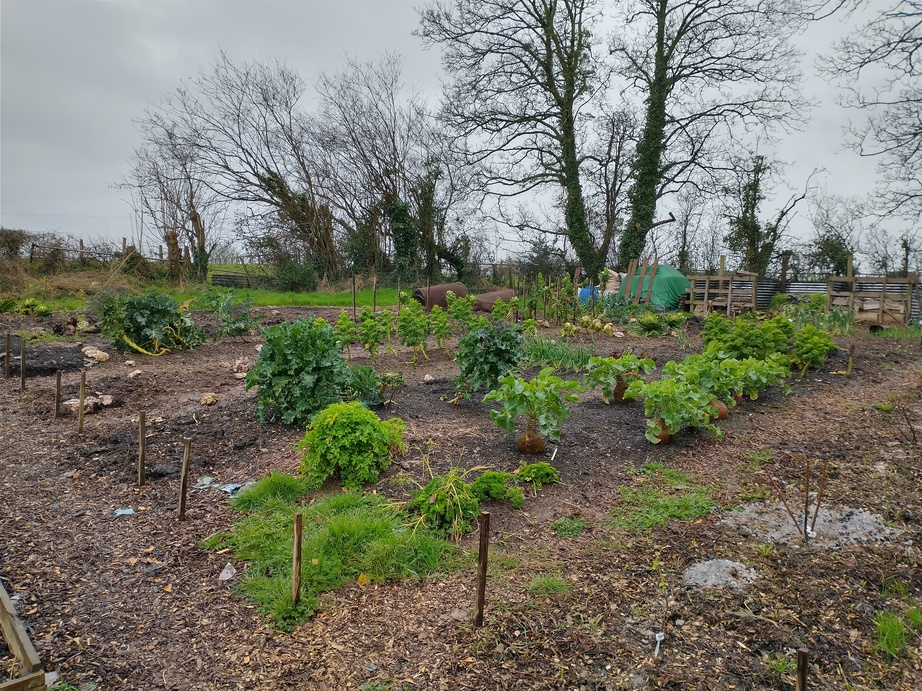 Hopefully this is close to the low point of the year and within a month or so things will start to look more exciting.

I wasn’t able to swim yesterday because the centre was short of lifeguards again, so I turned up today wondering what it would be like after last Thursday’s disaster.

As it turned out, the answer was not as bad as I expected. The five second reduction in interval time did make it feel very tough, but I actually managed eight reps before failing on the ninths and had only one further failure on rep fourteen. Even my 25m set afterwards wasn’t too bad. Not my fastest, certainly, but also a fair way from the slowest.

Yet another trailer load of woodchip

This is mostly from the hedge work I did yesterday. Whilst sycamore seems to chip very nicely, some trees that have softer, more “whippy” twigs can end up just having them cut into long strips. 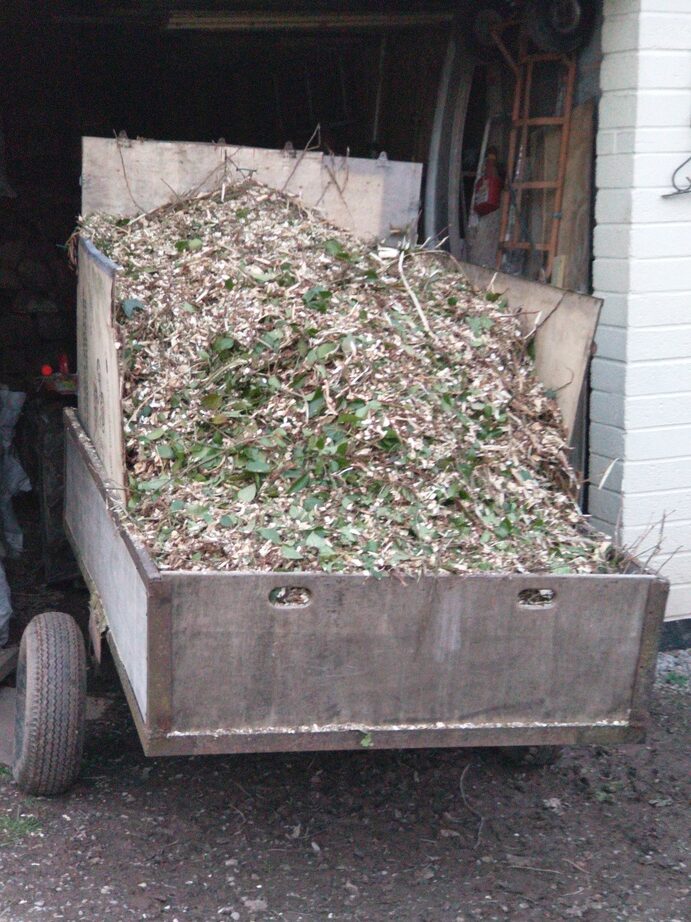 Fortunately I think most of this lot will go under beehive stands in the apiary where it’s fairly well out of the way.

Would you like some roast dinner with your parsnip?

This may well be the biggest I’ve ever grown! 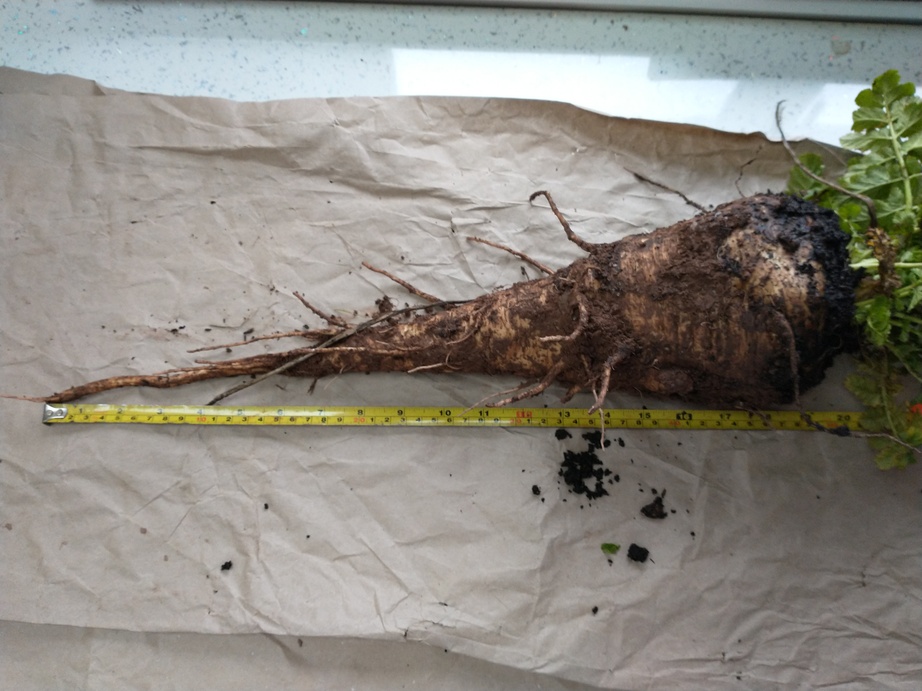 It’s not my intention to have them so big. This year I’m going to try growing some closer together in an attempt to restrict the size.

Today I have been sowing more peas for shoots and radishes, peas for, err, peas, sugar snap peas and a few flowers (nasturtiums and cosmos), until I ran out of seed compost, so sieving some more is now on my list. I would have done it this afternoon, but the weather has been miserable 🙁

The greenhouse is starting to fill up now. 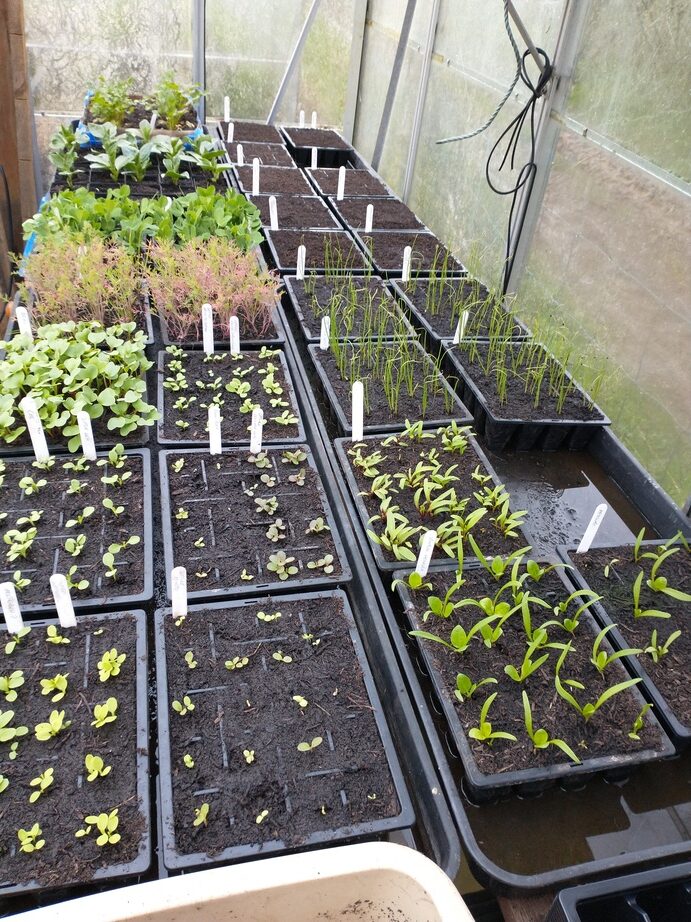 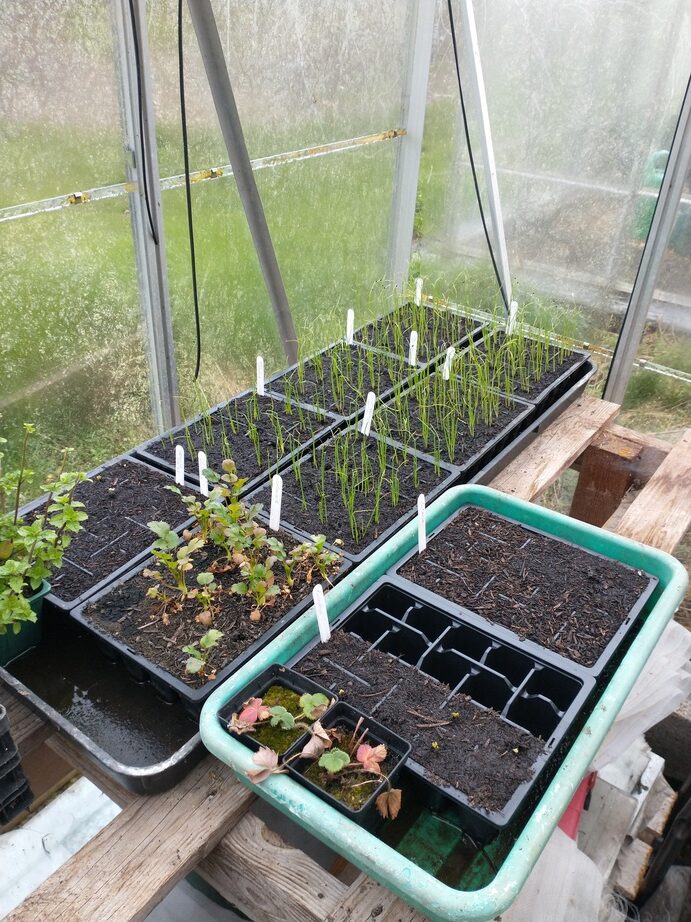 I also lifted the remaining parsnips as they’re starting to produce leaves again.

The peas, broad beans and radishes that I sowed a few weeks back are now in need of transplanting, so that’s on the list for this week. Some of the mustards and other leaves in the polytunnel are also pushing up flower stalks, so they can go on the compost heap and the peas and radishes can go in their place.

Lots of the winter brassicas are clearly also thinking about flowering and I suspect we only have a week or two left for the sprouts and curly kale. The few remaining beetroot might get turned into soup. I shall be researching what we might be able to do with the sprouts, swede, parsnips and leeks. I don’t think I’ve ever managed to grow enough before that we started to come out of winter with vegetables still in the garden. Could be a bit of a gap now though, until this year’s are ready to harvest.

No sowing today. Mostly I’ve been thinning the hedge alongside our polytunnel to stop it shading the tunnel quite so much. Not much time left for doing this sort of stuff now. Spring hasn’t arrived here yet, but driving into the local towns that are lower in altitude, it’s clearly on its way.

I wasn’t feeling particularly great yesterday — I think I must have slept awkwardly and woke up with a stiff neck and shoulder, so I didn’t swim. I probably shouldn’t have bothered today. It was dire 🙁 Less said the better, really.

Well, what a blinding session…

Four people in the fast lane including myself, some swimming a good deal slower than I was, but nobody happened to be in the way at any crucial point during my 50m set and I just kept putting in times below my target. Sixteen reps straight off the bat, that’ll do nicely, thank you. Very pleased indeed. I’m amazed that it took two months to complete the set when my interval was ten seconds longer, then a month when it was five seconds longer, and this one has taken me a week, basically. Perhaps that’s why I feel so tired 🙂

Even better, I also managed to completely my 25m set without any failures too. That usually feels impossible after a good 50m set, so I’m doubly happy this evening.

My next swim, on Wednesday, is going to be seriously tough though, with another five seconds coming off the 50m rest interval.

I had a bit of a scrappy start to today’s session. It took me a few reps of my 50m set to get into the groove at which point I completely lost it again because someone told their child to swim in the fast lane when she really wasn’t anywhere near fast enough to be safe. I had to stop and point this out to her parent and suggest she move to the medium lane instead which disrupted my timing. However, from then on I managed all of my reps under the target time. I was quite impressed as my arms were feeling a bit tired before I even started, having spent a good few hours stuffing bits of tree through the chipper before going to swim.

Sadly it did mean my 25m reps were a bit of a mess. By that point I just couldn’t find the pace, not helped by failing to stop the stopwatch several times. I swam out the set, but it wasn’t great.

There was a little more sowing to be done today. Mostly tomatoes, but also some Romanesco Cauliflower. This year I’m trying Apero, Olivade, Costoluto Fiorentino (seed left over from last year) and Amish Paste tomatoes, together with some random red cherry seeds I was given. Not sure what I’ll do with the latter. I did want to grow some yellow tomatoes, but couldn’t get seed for the variety I was after. If I can find something else then I might well abandon the red cherry plants in their favour.

I’ve sown only a small number of Romanesco Cauliflower with the intention of trying to grow some in succession (as with the calabrese). Again it’s a bit of an experiment. I can find no information on whether it’s day length or growing degree days or something else that causes the plants to produce flower heads, so I’ll just have to see what happens.

Of the seeds already sown, the chiles and sweet peppers are mostly doing well. 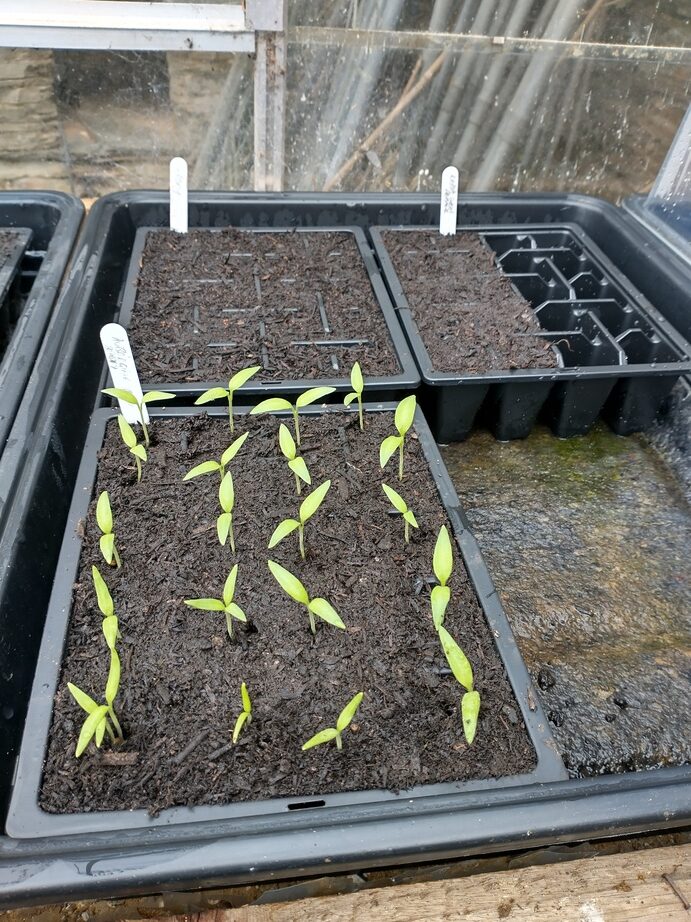 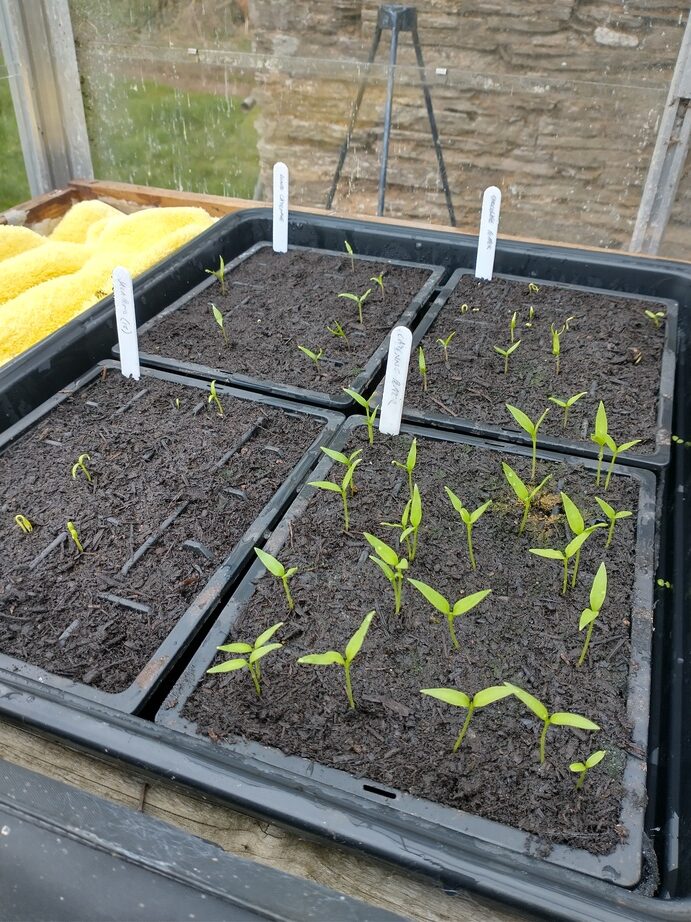 The peas for shoots are looking very healthy. 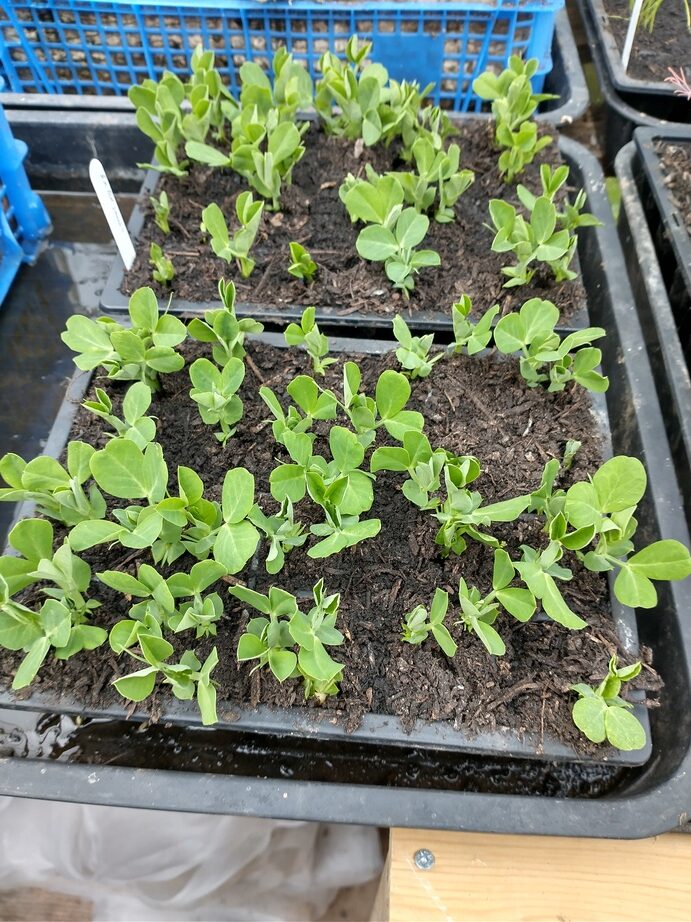 Radishes will need to be planted out quite soon I think, and the lettuces are coming up (and spinach is in need of thinning at the top right). 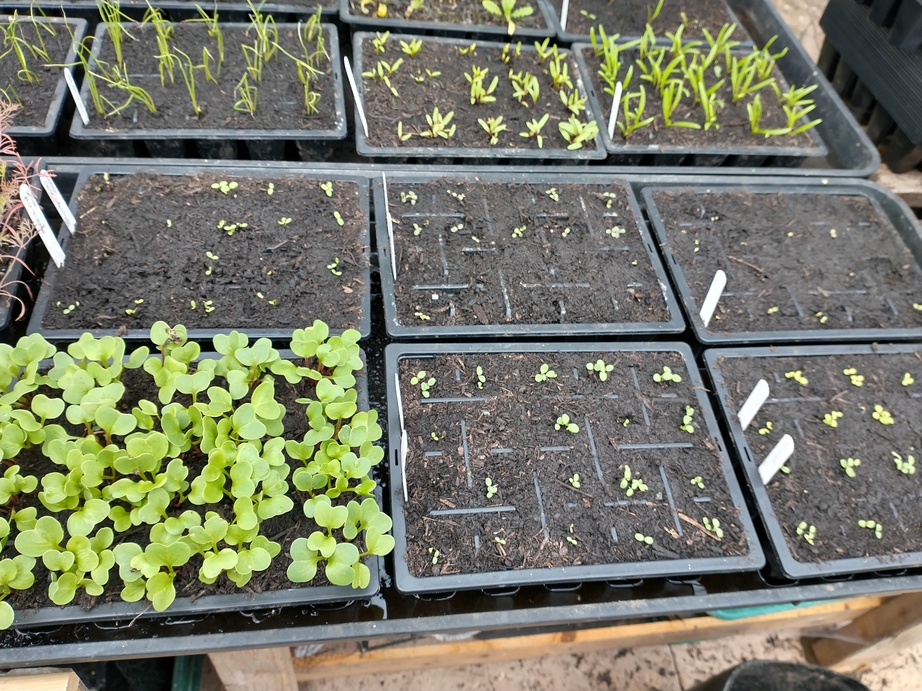 Many of the broad beans are producing leaves now, too. I don’t think it will be long before they have to go out either.