Testing out the Crytec chipper

I couldn’t leave it sitting around for long, so today I hooked up the chipper to the towing hitch on the tractor, locking the stand in the “up” position to stop it dragging on the ground, and towed it up to the compost heap. I also fetched the trailer and went around the property collecting up recently-trimmed branches that were too small to waste time on chopping up for logs. We had a fair size pile by the time it came to fire up the chipper (which started very easily again) and leave it to warm up for a few minutes.

I wore my chainsaw helmet rather than separate goggles and ear defenders. Whilst having a cooler head might have been nice, the mesh mask is much more comfortable to work in, and obviously protects the entire face rather than just the area around the eyes.

In terms of performance, the machine did everything asked of it, sometimes in quite a scary fashion. A light touch is definitely required on the material going in, as it will often just grab the end and pull it into the machine. On larger, harder wood the engine did slow a little, though I didn’t have it on full throttle anyhow. Allowing it to feed through at its own rate worked fine though. It’s fast enough that there’s no reason to try to force things along.

The drum did block up once, necessitating the removal of both chutes to clear the chips out. I suspect that might have been the result of over-zealous feeding of the beast. I think it can be kept under control though by checking that the feed chute is clearing properly every so often, and if not then using a bit of the feed material just to disturb any build-up of chips enough to have them scooped through the machine when no new material is being fed through. That worked for me and there were no further problems.

The output chute seems to work far better when it’s pointing directly away from the machine. By the time it’s at right angles, there’s far less control over where the chips end up. Unfortunately when it’s pointing directly away the tow bar can be in the way. It is possible to remove the tow bar though there’s no quick release mechanism, so next time I’ll try with just a slight angle on the outlet. As I won’t be towing the machine on the road (I don’t believe it’s legal to tow on public roads) I might fit some sort of quick release to make it easier to remove the bar if I wish to.

First impressions though leave me very pleased. What seemed like a fairly large pile of trimmings from trees turned into a relatively small pile of woodchips and broken leaves in not very much time at all. It certainly should make life much easier and mean there’ll be no waste wood when trees are felled or cut back because it can all be used on the garden or put in the compost. In fact, I used some of the chipped wood immediately to mix in with a batch of grass clippings from the mower as they were put into one of the compost bins. 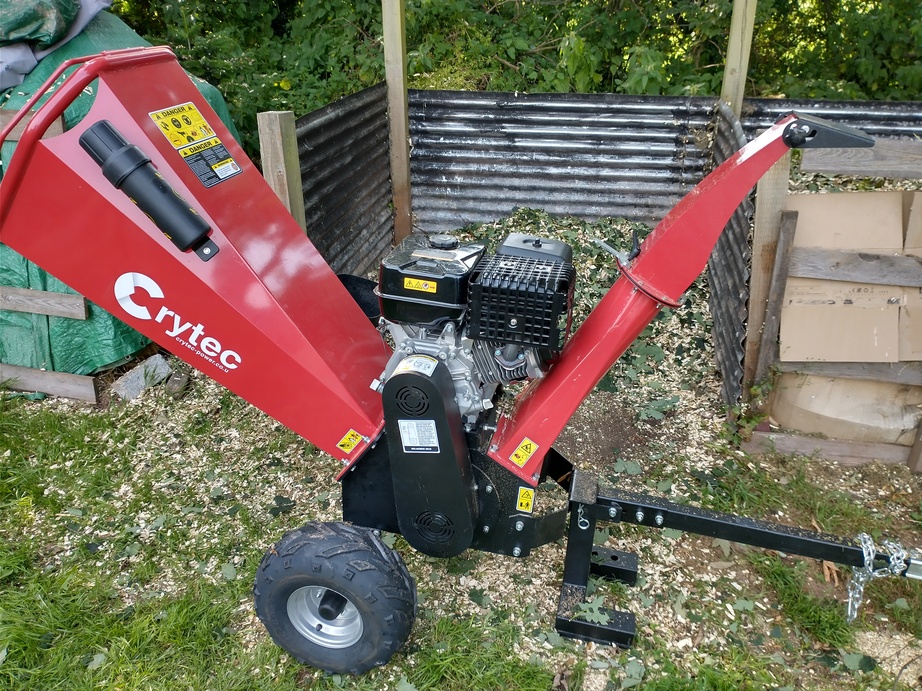 This entry was posted in Machinery, Smallholding and tagged chipper, compost. Bookmark the permalink.