I think I need some practice at plaits 🙂 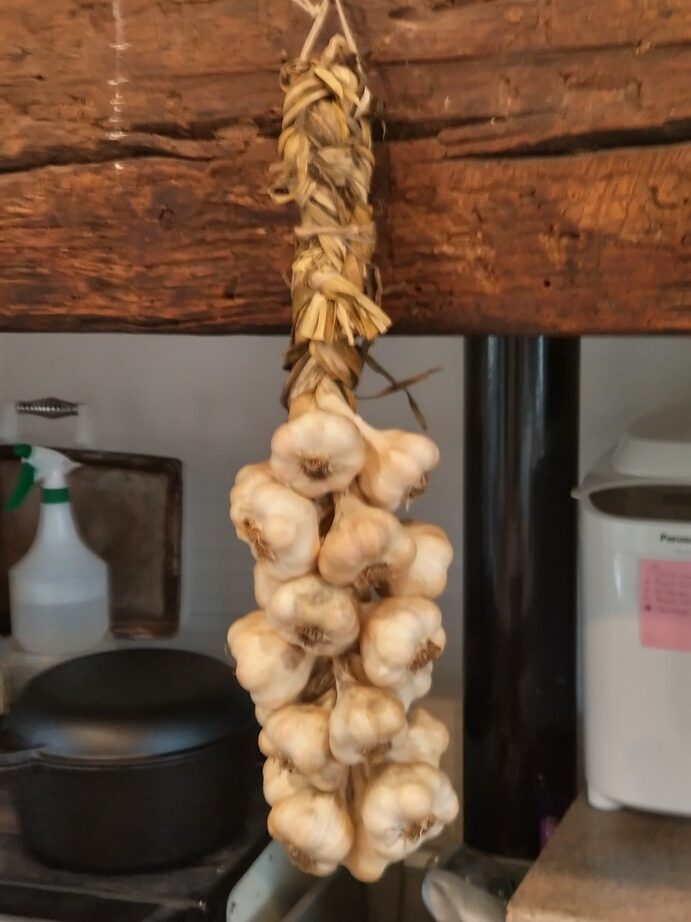 That’s probably about a quarter of the garlic harvest this year. Perhaps a touch more, but not much.

Despite the rubbish weather I have also been out in the garden a bit. I’ve lifted most of the netting off the brassicas as they were getting too big for it, and been out on caterpillar patrol. I’ve also sown more lettuces, and planted out the ones I sowed a few weeks back.

In the polytunnel I’ve tidied up the butternut squashes so they’re not taking over quite so much. I’m a little concerned that I can’t see many fruit, though that might just be down to the amount of foliage. The cucumbers are certainly not having a problem in that respect. I removed a dozen and a half of the older ones to just leave the more recent fruit. Not sure what I’ll do with them yet, but if all else fails the chickens love them. The coriander that I planted for leaves and left when it started to flower now has lots of seeds, so I’ve cut the heads off and removed the plants. I might have to make a paper bag to put the heads in just to dry them off before I separate the seed for use in the kitchen.

One mystery I have yet to solve is what’s eating my basil. A lot of the leaves suddenly have large holes in. I’d suspect slugs or snails, but it’s not really a friendly environment for them in there as the surface of the compost and path is very dry.

This entry was posted in Smallholding, Veg plot and tagged basil, garlic, lettuce, no dig, squashes. Bookmark the permalink.