Since the last release of oacapture I’ve mostly been working on oalive, an EAA-type application that will share a large amount of code with oacapture. One of the new things I wanted to do with this was to add support for DSLRs — initially Canon, but I’m hopeful that some Nikon and Sony cameras might work too, as I have further plans once I have DSLRs working. This isn’t particularly straightforward as there’s no direct support for this sort of thing from Canon on Linux (and I assume MacOS). However, there is an interface library that has been reverse-engineered (though isn’t desperately well documented unfortunately), so I’ve started getting my head into that.

For the first time tonight I have actually been able to connect from my Mint 19 desktop to my wife’s 1100D (my 450D is in the observatory and she’s not using hers 🙂 set the exposure time, ISO setting and so on, grab an image (a small part of my 3d printer through the nifty fifty lens, as it happens) and display it on-screen. Feeling quite chuffed with myself now. 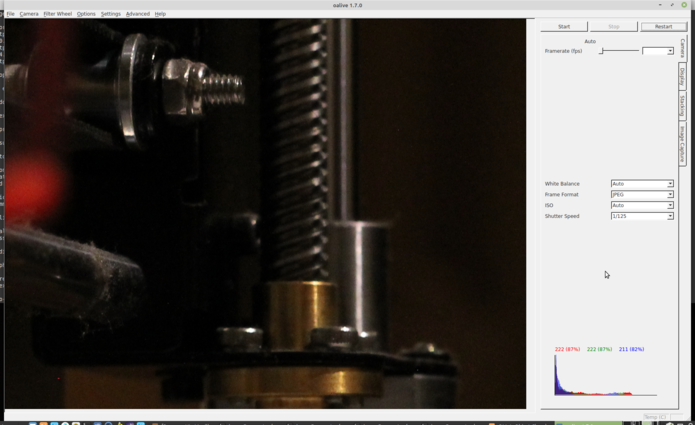 This entry was posted in Astroimaging, Astronomy, Computing, Linux and tagged oalive, openastro. Bookmark the permalink.