With the proliferation of devices attached directly or indirectly to my telescope mounts it seemed sensible to consider placing a USB hub directly on the mount and running a single USB cable to the controlling PC, rather than having a cable running up the mount for every device. At the moment I have USB connections for the mount itself, filter wheel, guide camera and imaging camera, but I may later add a focus controller, camera rotator and potentially even have dew heaters with a USB/serial interface. If I get to the stage where things are very heavily automated I might even have controller devices for flaps over the end of the OTA for darks/storage and flats that are USB-connected.

Given the move to USB3 for many newer cameras it seems sensible to go for a USB3 hub, and with its own power supply rather than using parasitic power from the host USB interface. Startech were high up on my list to consider as they generally seem to have a good reputation, but they can be quite expensive. In the end I went for a seven-port USB3 powered up from Orico. I’ve had one of these on my desk for a few years and it has been utterly reliable. It also has an aluminium case with end plates held in using screws that might well allow for a proper mounting bracket to be fitted. And unlike the Startech hubs I was looking at which run off 5V and would require an additional buck converter to step down the 12V supply at the pier, the Orico hubs run at 12V and have a standard 5.5/2.1mm power socket, just like all the other kit on the mount. The main negative really seems to be the number of bright blue tell-tale LEDs (one for power and one for each USB socket in use). Some black insulating tape will probably take care of most of those.

For the time being I’ve just zip-tied the hubs in place, but they seem to be doing the job very nicely. Oddly I did find that my Atik 314L+ wasn’t even recognised by the USB hub in the controlling PC, but works fine with the hub. As it’s USB2 I’m not too worried about that going through the USB3 hub. Imaging cameras that are USB3 however I will still route directly back to the PC to try to avoid contention for bandwidth on the USB bus as much as possible. 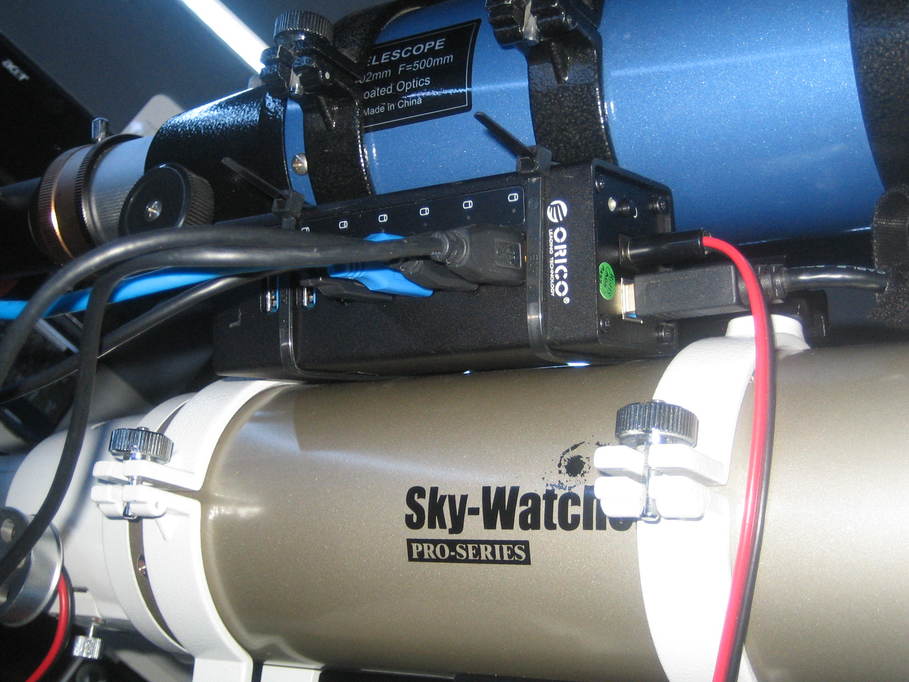