As the rest of the family has been seeing the observatory slowly being constructed over the last year and we had some clear sky I thought I’d have a go at something fun to show them now I’ve reached the point that it’s usable (though some way from complete), so I set the 450D up on a tripod with the kit 18-55mm lens wide open, pointing back at the house with the intention of taking some subs to combine into a star trail image.

Sadly the clouds didn’t appear to have read the forecast and the five hours of clear sky I was promised turned into an hour or so of mostly clear sky, and the cloud was worst to the south west — the direction of the house. So this is all I ended up with: 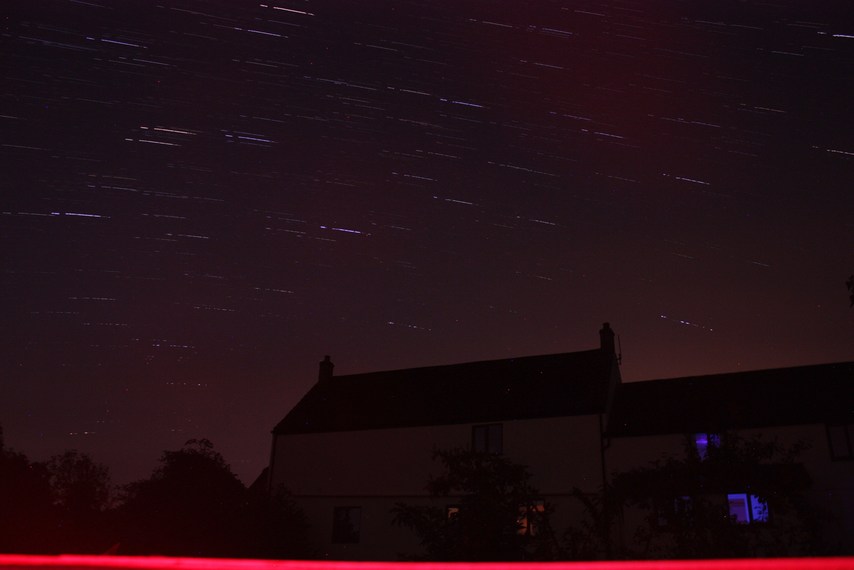 Perhaps the most interesting thing about it is that there are no lights on in the house at all. The lit windows are all illuminated by power indicator LEDs on chargers, clock displays and suchlike.

It’s not all negative though. I’ve been visual-only for quite some time whilst we’ve been having work done in the house because it made sense to pack kit up to keep it out of the dust, and during the construction of the observatory, so this is my first image of any kind in a fair while.

I did also grab some frames looking back over the observatory towards Cassiopeia, but struggled with the lens dewing up. I don’t have a hood for this lens which probably doesn’t help (and in fact the ones I’ve found online don’t look as though they’d be much help anyhow). I might try a dew heater, or attempt a 3d printed hood of my own. I should also have a go with my 14mm Samyang, though I suspect that will be even more prone to dew.