How not to cut down a tree…

I’ve been removing some sycamore branches that were overhanging the veggie plot from one of our hedgerows which hasn’t been too much of a chore thanks the pole saw, but one trunk had grown out at an angle over the compost bins and must have reached at least five metres into the garden so presented more of a problem to remove.

I decided if I could get it to fall in the right direction, against its lean, then it would miss the compost heaps and we’d all be good, so at the start of the week I erected a scaffold tower to allow me to take off as much weight as possible from the “wrong” side of the tree with the pole saw. Then yesterday I roped the tree to a winch attached to the base of another tree and put as much tension on it as I could to try to help it fall the way I wanted. So far, so good.

Cutting the wedge out of the tree facing the intended direction of fall was a bit tricky just because there wasn’t anywhere easy to stand, but I eventually got that done, added a bit more tension to the rope and started on the back cut. Not even a quarter of the way through, the tree sat back against the rope and nipped down hard on the bar of the chainsaw so it was stuck. I had some wedges, but hammering those in and tightening the rope further still didn’t help. Possibly I should have put the chainsaw in sideways and left a “strap” at the back, but it really wasn’t quite large enough for that approach given the awkward position I had to work from.

In the end I had to resort to breaking out the hand saw and making a new back cut with that, putting more tension on the rope as I went. Eventually the trunk started to make cracking noises and with a little more sawing and a lot more sweating, it fell neatly alongside the compost heaps. Not quite where I’d planned, but at this point anything that meant it didn’t fall on top of the heaps was a positive.

With the chainsaw now free I was able to cut off all the bits that won’t make decent logs for the wood burner next winter, but by that time it was getting dark and I had to stop.

This afternoon I fired up the chipper and fed all the rubbish into it. There was quite a big pile 🙂 However, I now have a decent size pile of chips that will either get used in the veggie plot, or possibly under the stands for the beehives, to keep the weeds down. 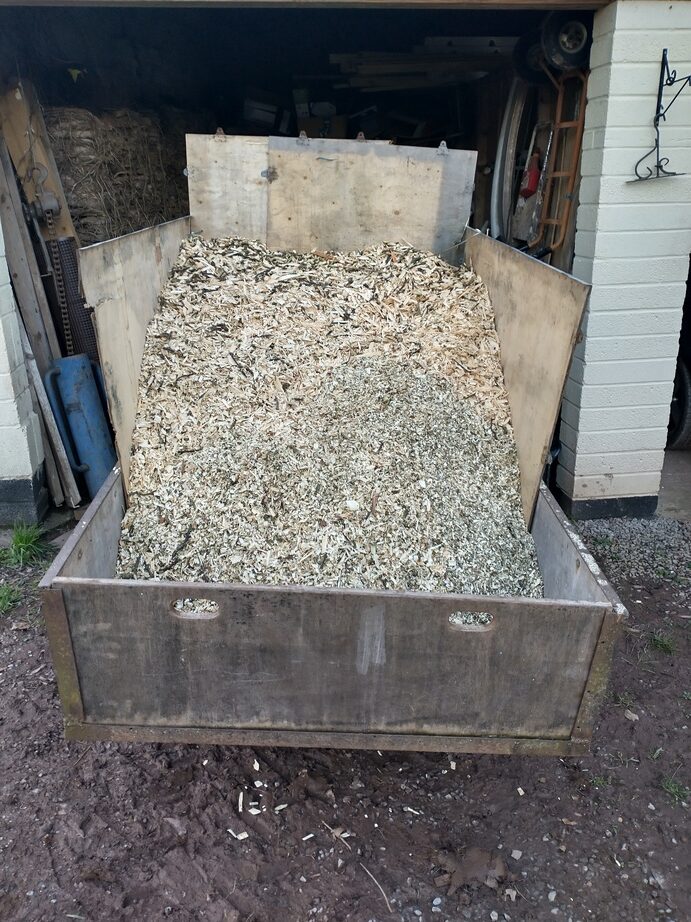 Now the danger of having stuff fall out of the sky has been removed my intention is to extend the compost heap area, put up a storage shed and build (yet) another greenhouse, but more of that another time.