I wasn’t expecting much of today as rain was forecast for the entire day, but other than a few showers and a thunderstorm that woke me up at about half past five this morning it has not materialised. Possibly the sky has just run out of rain for the time being, having bucketed down most of yesterday evening into the early hours. Instead it’s been quite sunny, if a bit breezy, but still comfortable to be outside in shorts and a t-shirt. I’ve therefore taken the opportunity to get more compost and woodchip down on the new bed and in fact have managed to finish it all. 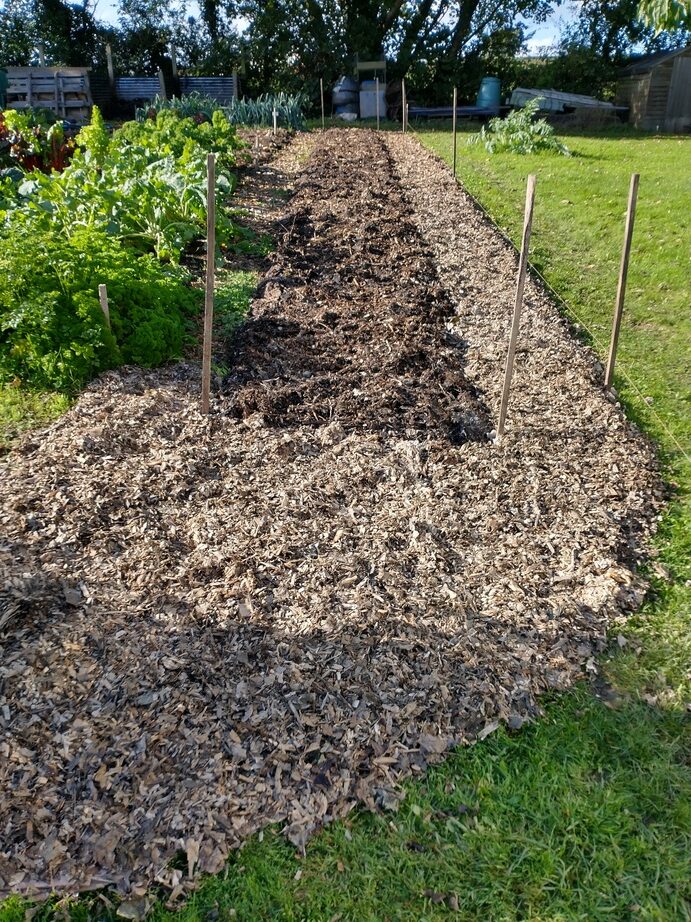 The area of woodchip at this end is quite large because it means there are no awkward corners to mow into around the end of the raspberry canes (which are out of shot to the left), but I didn’t want to extend the bed any further because it would either make a narrow point in the path or I’d have to taper the end of the bed. I could still do the latter if I end up putting some fruit bushes in; it’s hardly a huge amount of work to do.

It’s possible that I’ll add a little more compost early next year, but we’ll see how it goes with what’s already there first. Otherwise there should be no more work required until I start planting some time towards the end of March, I guess.

I do have some clover to clear up at this end of the path on the left. If I can’t dig that out I’ll probably mulch over the top with more cardboard and woodchip. And speaking of cardboard, I reckon I probably have about enough left to finish the path I still need on the other side of the plot, so it looks to have worked out quite nicely.

This entry was posted in Smallholding, Veg plot and tagged asparagus, no dig. Bookmark the permalink.