We had some unexpected sunshine today, so I got out in the veggie plot and relocated all of the cornflowers and nasturtiums (which are no longer flowering) to the compost heap, evicting a large number of slugs in the process. The remains of the french bean and borlotti bean plants went the same way so I could take down the canes that have supported them. And my final addition to the compost heap today was the remains of the outdoor butternut squash plants. The harvest was hardly great. There are a couple of barely passable sized fruits and a load of “fun size” ones that I’m not sure will be worth the effort of using. We’ll see. 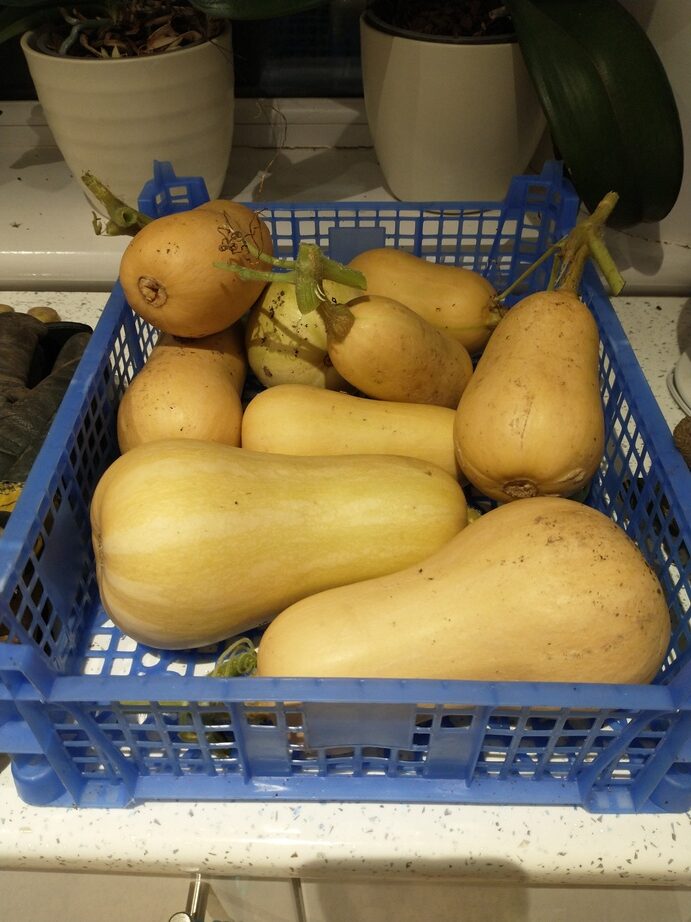 As those in the polytunnel seem to have done much better (I’ll harvest them soon) I’m going to guess that the plants would have preferred a somewhat warmer summer.

As it’s Wegetarian Wednesday we had a meal tonight that called for butternut squash, but my wife used one of the Uchiki Kuri squashes that I harvested a week or so ago instead (she says that recipes are “mostly guidelines” :D). Very nice it was, too.

Whilst she was cooking I was busy at work with the apple peeler/corer, working my way through a load of windfall apples that I have now melted down and put into the dehydrator to make more apple leather. I reckon I’ve only done about half of the apples, so there’ll be another batch once this lot is done (by which time there’ll probably be more windfalls 🙂

Returning to the subject of the compost, our third bin is getting close to full. If my father-in-law cuts the grass this weekend then it definitely will be. That would probably work out nicely as I can put some woodchip in with the grass and it will inject some more heat into the heap to keep things breaking down over the next couple of months. I’ll need more space though, so it’s probably time to start emptying the first bin from this year (which now occupies only about a quarter of the bin having been full-to-bursting when I stopped filling it) and spreading it on the clear spaces I’m making in the veggie plot. Once that’s done I can plant out my spring onion seedlings for next spring.

Whilst chatting with my father-in-law about this winter’s vegetables I found myself wondering quite how much of the plot I can realistically use for winter brassicas given sufficiently careful planning. I have seven beds at the moment and whilst I intend to add an eighth this winter, that will be for asparagus so can’t really be counted as available for other things. Though the plants are scattered about a little, I reckon I currently have about three beds worth of winter brassicas. Better planning would probably allow me to use four beds. Five might even be possible, but could require a level of organisation that I might not enjoy. Each bed will be getting about a metre longer this winter, too. That effectively gives me another half a bed of space with no effort. I do think that we’d probably eat as much as I can grow, so it’s worth putting in a bit of effort. Possibly the first step is to look at all the things I’d like to grow and split them into groups depending on when they need planting out and how much time they need in the ground. Then I can work out what can follow what. For example, winter brassicas could follow onions because the onions will come out of the ground in summer in time to transplant the brassicas, but the other way around probably wouldn’t work because I’d be wanting to transplant onions before the brassicas were finished. The brassicas would have to be followed by crops that get planted out later such as peas, squashes, courgettes, climbing beans and sweet corn, or by things that can be grown at any time such as radish and salad crops. Perhaps I could get away with a summer brassica such as calabrese following a winter brassica, but I don’t think I’d want to do that repeatedly. Something like winter cabbage followed by calabrese followed by salad crops and then garlic could work though.

Another thing I want to think about is ground that might be unused over winter. I’d prefer to avoid that if I can, but the only other winter crops I can think of at the moment are endive and chicory and at the moment they might be a step too far when it comes to the dinner table. On the other hand, my daughter would like us to eat vegetarian more often. I don’t have a problem with that, but I do want a reasonable amount of variation in what we eat. Perhaps that’s the price she’ll have to pay.

This entry was posted in Smallholding, Veg plot and tagged no dig, squashes. Bookmark the permalink.