So it turns out I am not Batman

So much that my greenhouse flooded thanks to water running off the hill above us and seeping up through the ground. That was the last straw and forced me to get on with a little project that’s been at the back of my mind for some years to put in a french drain in that part of the garden to direct the water elsewhere. This should stop my current greenhouse flooding and also give me a suitable area to erect another, but more of that later.

Digging the trench for the drain went fine (swimmingly, even?), as did laying the drain, but when the time came to fill everything in again I failed to notice how soft some of the ground had become. What was it that Henri Ducard said to Bruce Wayne? Learn to mind your surroundings? Well, I failed on that one. Whilst I was engrossed in filling the ditch one side of the digger sank into the mud. And sank a bit more. And then sank to the point where I couldn’t move the digger forwards nor backwards. 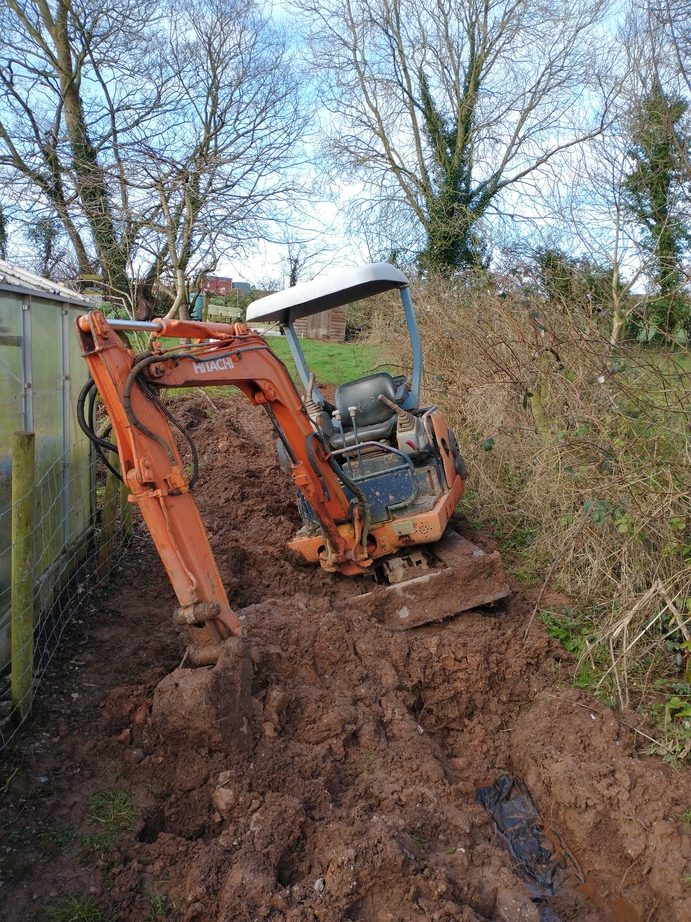 The entire right track (left as you look in the picture) was below ground level, and in fact the bodywork was almost touching the ground.

I did eventually recover the situation, so feel free to point and laugh. A couple of lengths of steel chain wrapped around a tree trunk (off the right hand side as we look at the above photo) provided something I could pull on with the bucket (having turned the digger body to face that way until it did actually completely ground out). That lifted the track a little and allowed me to shuffle the digger into a position where I could spin the cab around and balance the digger on the other track and the bucket, lifting the submerged track clear of the ground. I found a load of bits of broken concrete block and filled in the hole where the track had been which allowed me to drive out quite easily.

So what have I learned from this episode? Well, I am clearly not Batman. I can live with that I think. I see myself more as Iron Man 😀 Other people probably see me more as the Hulk, but if I were, extracting the digger would clearly have presented far fewer difficulties 😀

This entry was posted in Projects, Smallholding. Bookmark the permalink.