My intention is that crops such as radish and carrots should be permanently under protective netting this year, to minimise the damage done by carrot root fly and flea beetle. I also want to try to protect the brassicas from whitefly as much as possible (and butterflies, come to that). In the kind of volume that I want them, hoops to support netting start to look quite expensive, so I’ve been thinking about DIY solutions.

Initially my plant was to buy some 4mm galvanised fencing wire and bend my own hoops around a former. It’s a bit of a faff, but considerably cheaper than buying them. Last night I read some suggestions online about using either MDPE water pipe or lengths of garden hose, fitted over short lengths of garden cane at each end to make a hoop. As luck would have it I have a few off-cuts of MDPE pipe lying about, and some black 12mm hose pipe that must be close to thirty years old and has lost much of its flexibility, so I’ve made up a few hoops just to see if they stand up ok. Half of them I supported with canes pushed into the ground. For the others I found a 25mm square tree stake and ran it through the band saw to quarter it lengthwise and used lengths of those instead. My concern with the hose (which I certainly have plenty of) is that it might become too soft to support its weight in hot sun, but it may well work fine for the other 364 days of the year. 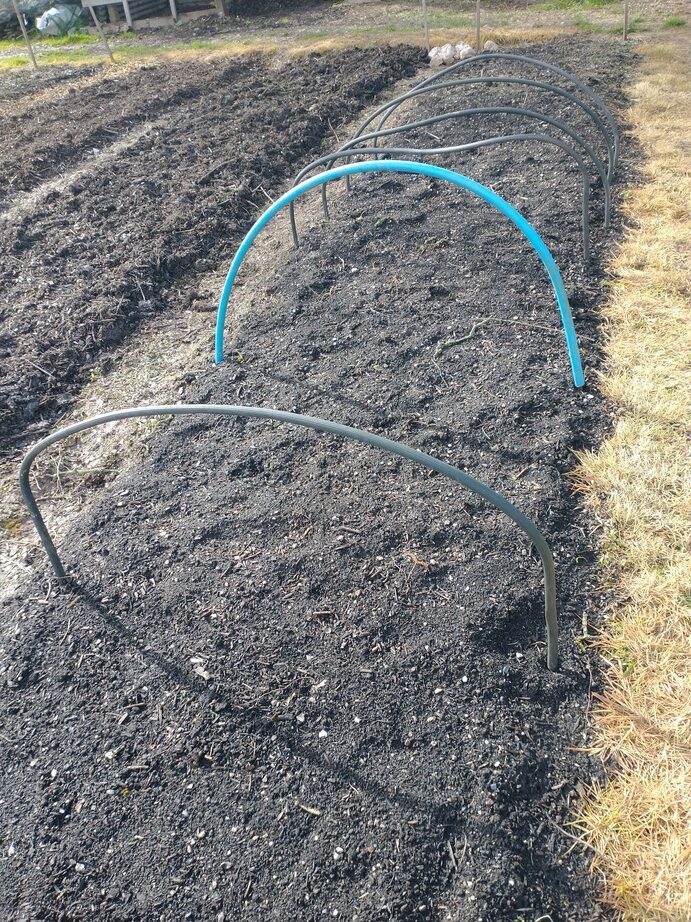