To go with our home-made chicken kiev this evening.

It’s been thirteen days since my last pick and there really hasn’t been much growth. I took at most two leaves from each plant, plus a few bits of coriander and chervil. Fortunately the corn salad in the outdoor beds was ready for a first pick and that bulked up the harvest quite nicely.

I suspect the lack of growth is down to the temperature more than lack of daylight though that certainly has to be a factor. The last couple of weeks have been a good deal colder than earlier in December when it was around 10C to 12C during the day and comfortably above freezing during the night. Since then daytime temperatures have dropped to 3C to 4C and nights regularly fall below freezing.

The total harvest was 83g; just about enough to go with our dinner. 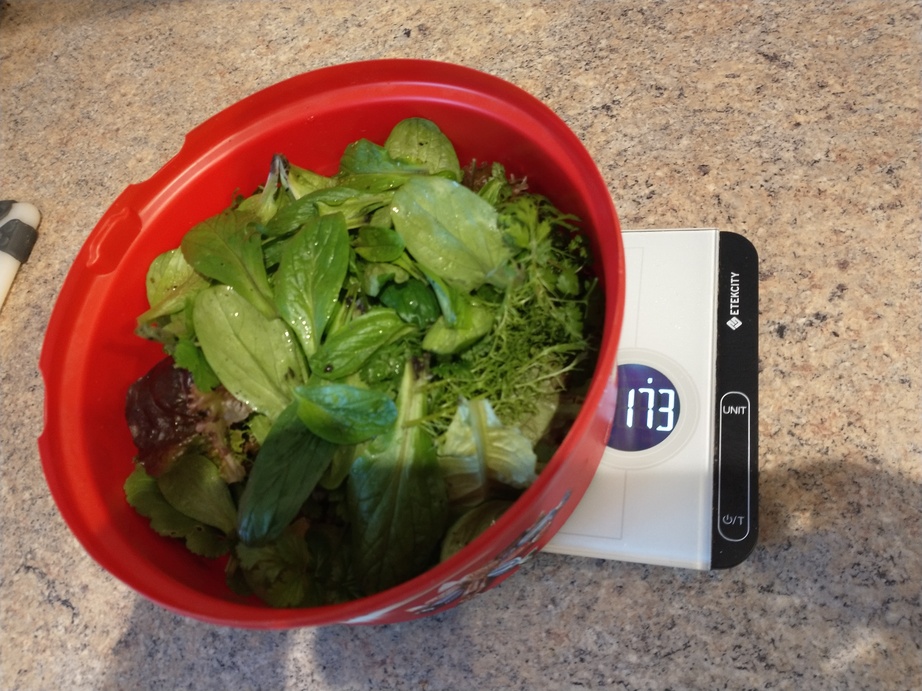 That brings the total winter salads harvest so far to 1234g.

I supplemented the leaves with half a dozen of the largest multi-sown radishes in the polytunnel. These have been a complete revelation, I have to admit. They’ve been tasty and well-grown with none of the disfigurement of the spring/summer outdoor-grown ones caused by flea beetle. Next year I shall certainly multi-sow far more for the winter, probably splitting them between the poyltunnel and the new greenhouse.

This entry was posted in Smallholding, Veg plot and tagged radish, winter salads. Bookmark the permalink.