Fitting a stand to “The Handy” 6-tonne log splitter

I was given this log splitter as a present some time back, but until last weekend have had no need to split logs so hadn’t used it. Pedants will point out that it won’t split six tonne logs, and real pedants will go even further to claim that six tonnes is a measure of mass, not force, so it should be something like a 6000 Newton log splitter, but hey, if it does the job…

The splitter is delivered as a set of parts and requires some assembly though the instructions for actually doing the assembly might at best be described as “barely adequate”. They don’t point out that the splitter can be assembled to be either right- or left-handed (fortunately I’m right-handed and the instructions are for the right-handed arrangement) nor that some parts can be fitted in more than one position and choosing the wrong one makes completing the assembly impossible.

The splitter also came with a stand (which may be an optional extra). After a quick check over the instructions for the stand (having already assembled the splitter) I decided I’d not bother to fit it as I’d need to disassemble some of it again and I did actually want to finish the job that weekend.

Other than that, it seems to do the job. I split lots of logs, even some nasty ones with weird grain where the tree had separated into two branches.

When I put the splitter away in the barn however, it struck me that hungry rodents might well develop a taste for the power lead and putting it on the stand would at least mean that only ninja rodents would get the opportunity. It was at this point I realised that the instructions for fitting the stand were worse than useless.

The first instruction is to “remove the wheels” from the splitter. But it doesn’t actually explain how to do this. A search online suggested that circlip pliers might be required, but having dug mine out it turns out they weren’t. The initial obstacle is a plastic cover with a fake moulded “nut” (why, for crying out loud?). This doesn’t unscrew, but twisting it around revealed a hole in the side: 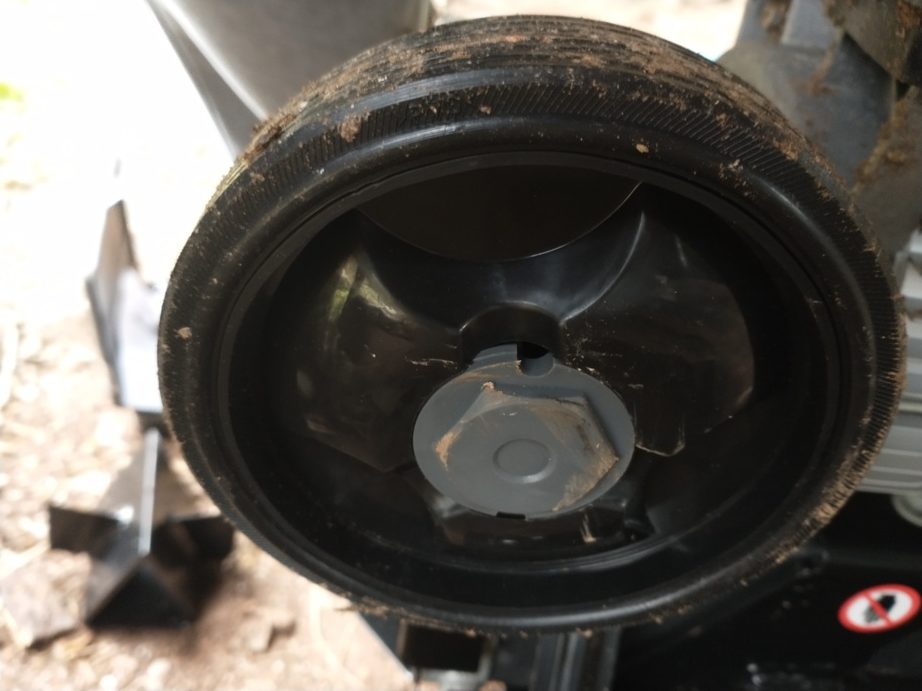 A screwdriver can be inserted into that hole and the cover popped off. 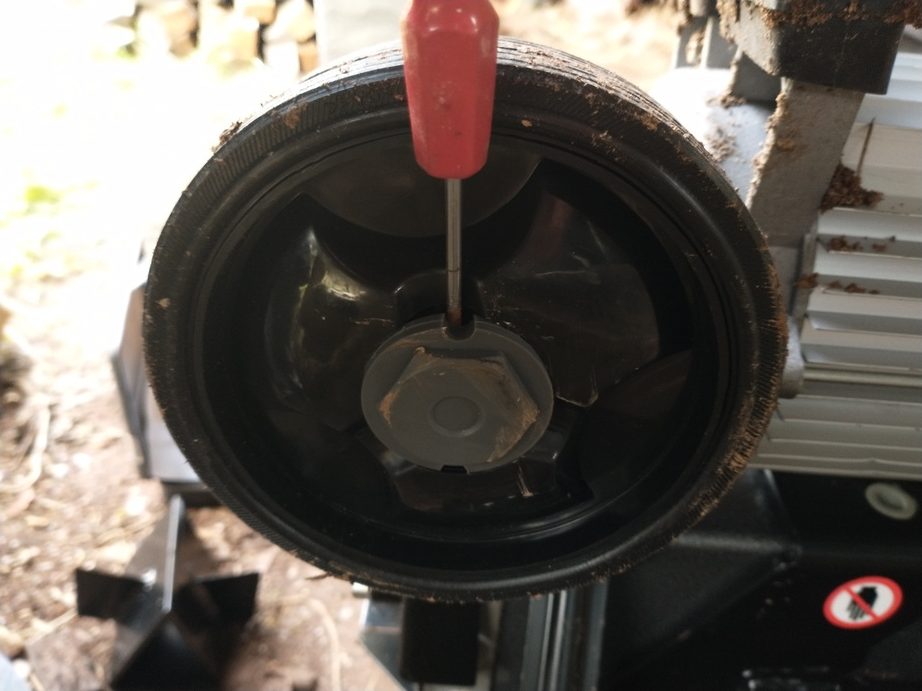 In my case this revealed a washer and a split pin that holds the wheel in place. 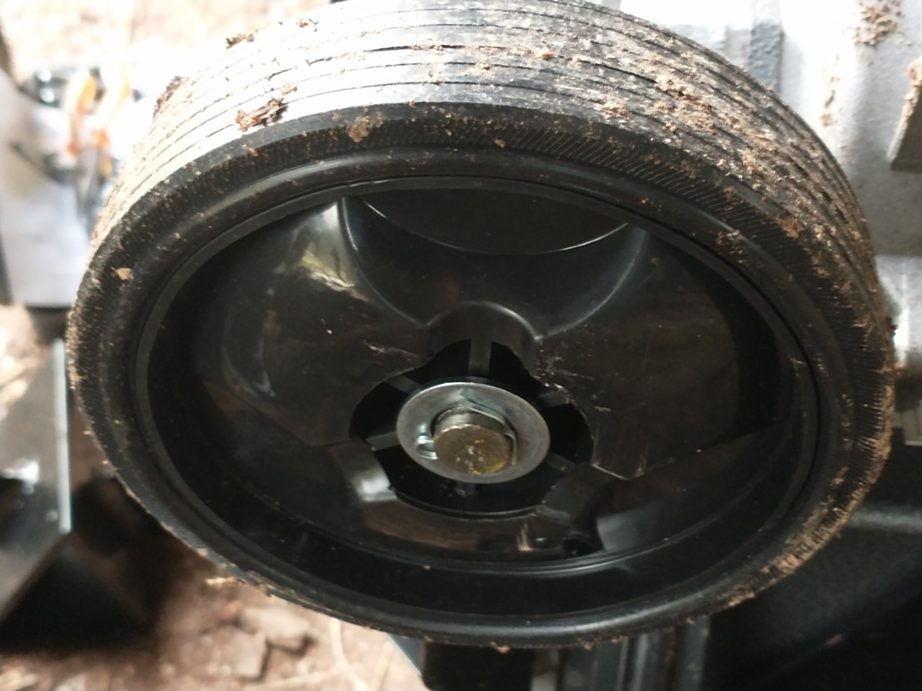 A pair of needle-nosed pliers made short work of removing the split pin and everything then came off easily. 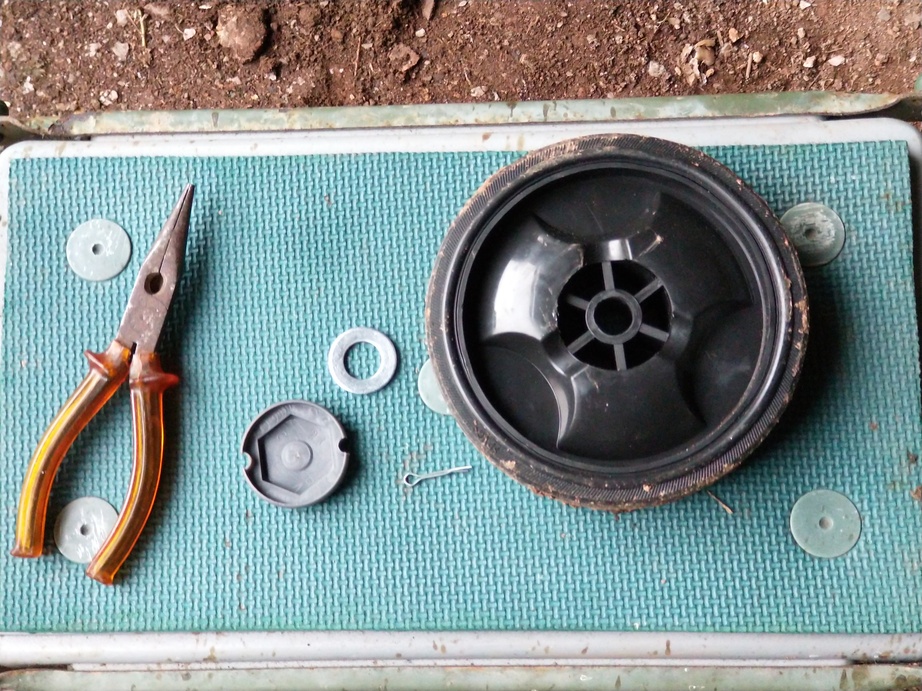 At this point I noticed the spindle for the wheel does have a machined groove that might once have been intended to take a circlip. I’d guess that a split pin is cheaper and faster to assemble at the factory.

So, having taken the wheels off and the foot at the opposite end which is relatively straightforward, the instructions tell you to fit the fully-assembled stand to the splitter. Only that just won’t work because once the stand is fully assembled it won’t fit over the old wheel spindles. I had to remove the two legs that fit at that end of the stand and refit them to the splitter first. 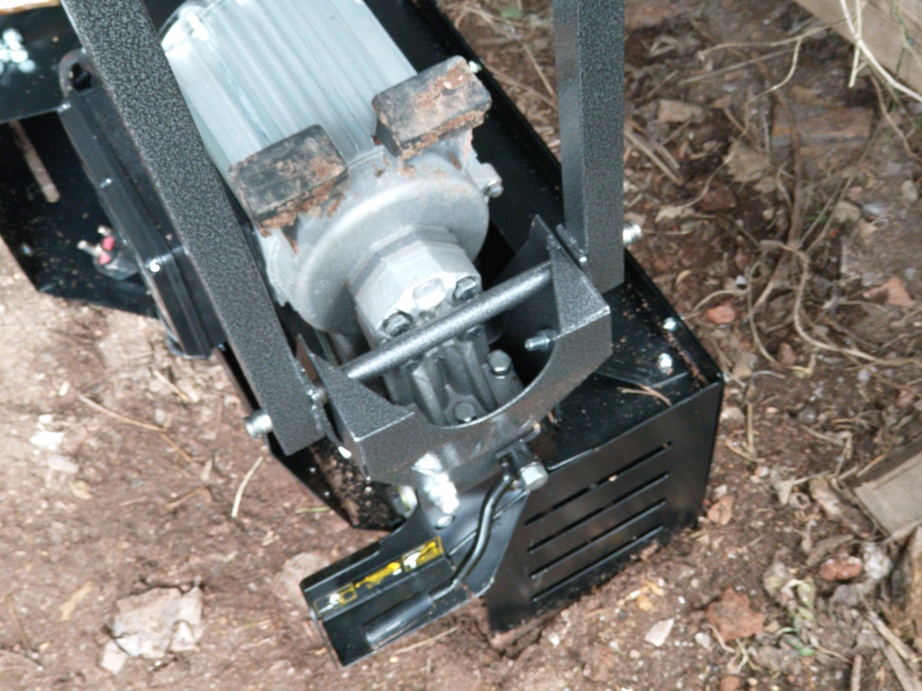 There are a couple of bolts to hold these in place, and they require the hands of a small child to reach in and fit them. Or you could try Donald Trump. I gather he has small hands and he doesn’t appear to have much to occupy his time these days. Having access to neither a small child nor the Trumpster, I chose the copious swearing option and eventually got the bolts done up.

That’s it for the “wheels” end, but there are four more bolts that need to be fitted to fix the opposite end of the stand. You’ll need an even smaller child for this one. 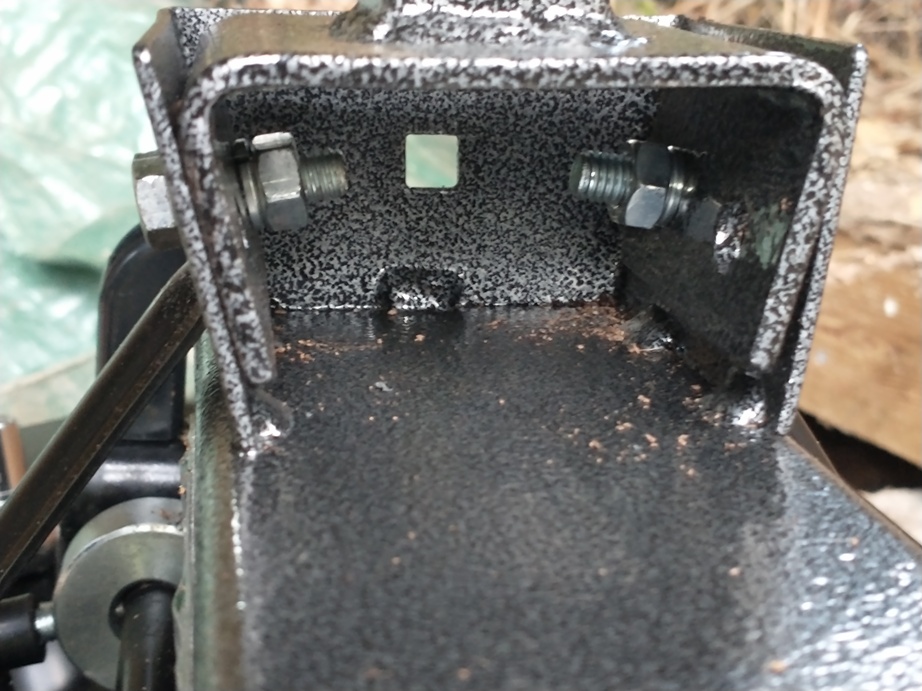 That gap is only about 30mm high and the further set of bolts are probably about 70mm back. Trying to fit nuts to bolts at an angle when you can’t possibly see what you’re doing is a major pain in the backside. I was forced to do some really serious swearing at this point (even the cows in the field next door complained), and then finished the job with a ring spanner.

Finally I could finish off tightening all the bolts up on the stand itself. I hate this bit of the design. The bolts basically just fit through a captive (welded) nut and press on the square section of the stand to hold it together: 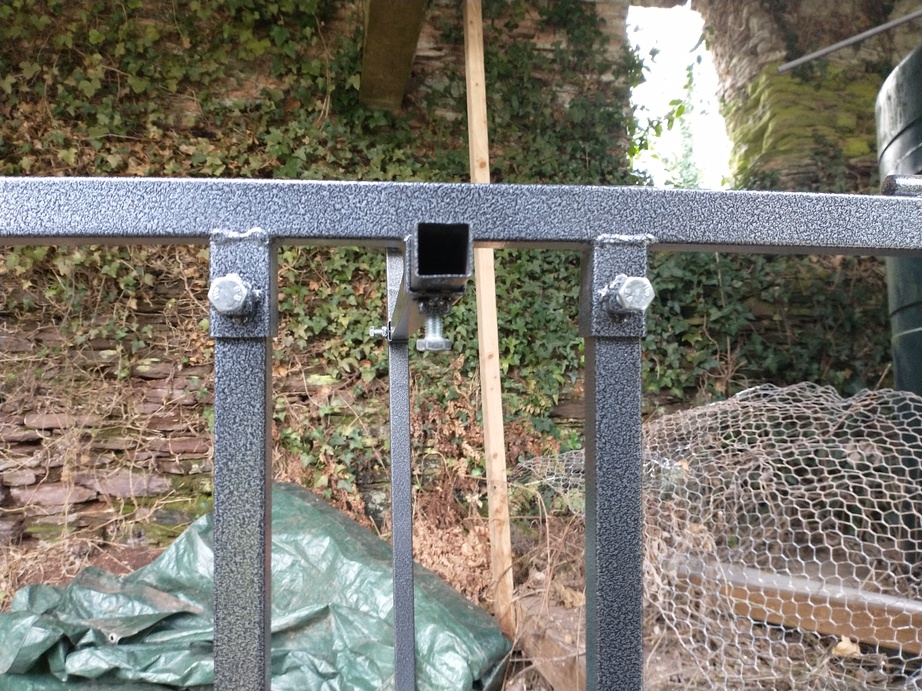 I think that’s a hideous bit of design. If I’m bored one day I might drill out holes in the tubes that make the stand and fit longer bolts all the way through.

Anyhow, with all that done only the wheels were left to fit to the spindles on the stand and in this case “assembly is the reverse of disassembly” as they say in all the best car maintenance manuals. And of course there are a few bits left over: the original “foot” from the end of the splitter that didn’t have the wheels, and a few bolts. 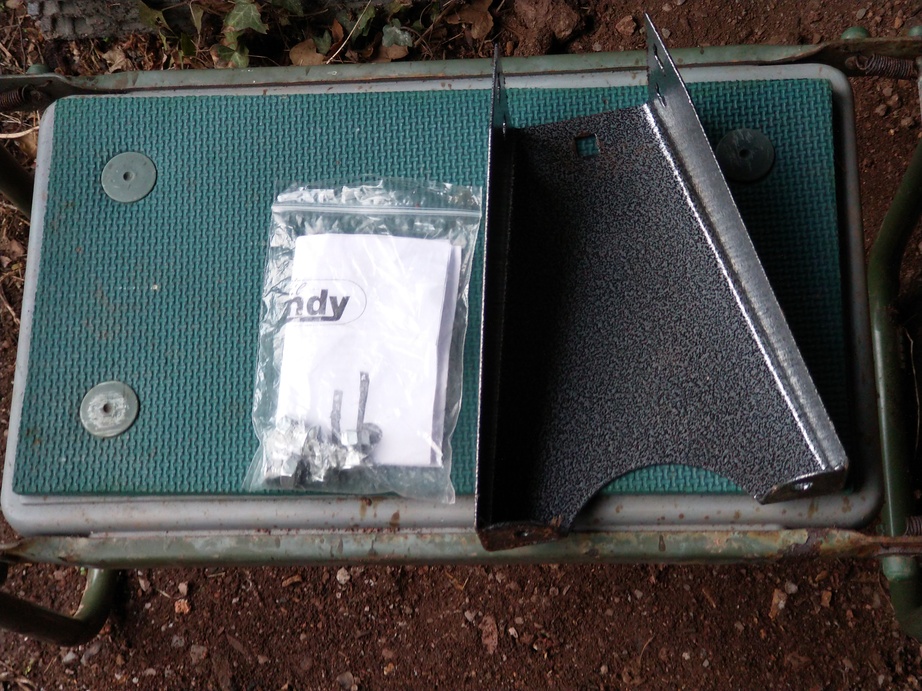 It’s going to be a while before I find out how it performs on the stand and if it manages to vibrate anything loose (I need to cut down some more trees first), but at least now I only need to worry about the ninja rodents. 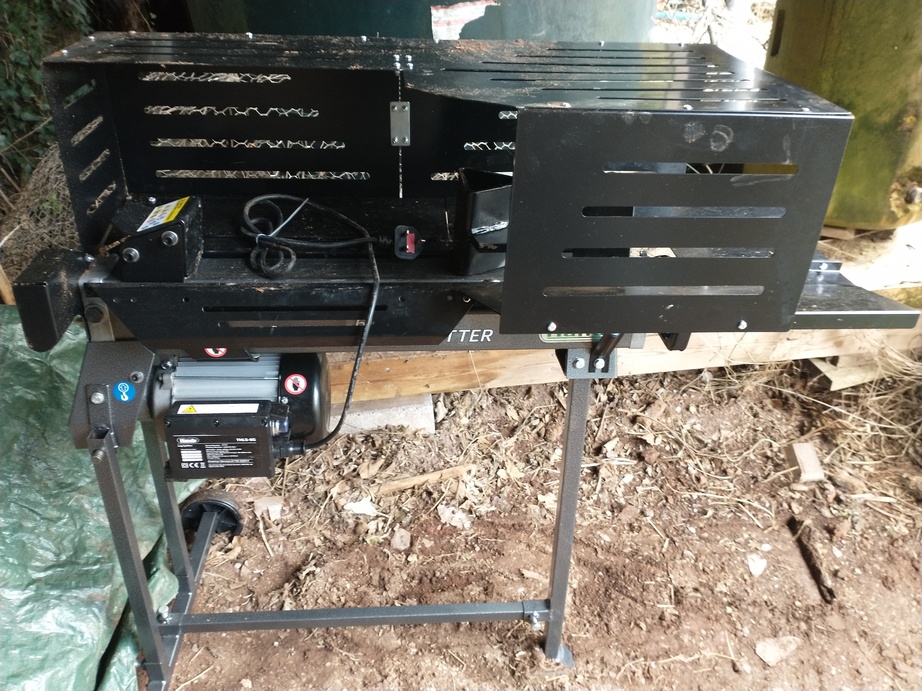 This entry was posted in Machinery, Smallholding and tagged log-splitter. Bookmark the permalink.