I had a hunt around in the barn and discovered that we appear to have the frames (and some glazing) for not one, but two greenhouses. I dragged all the parts out that I could find and separated them out. 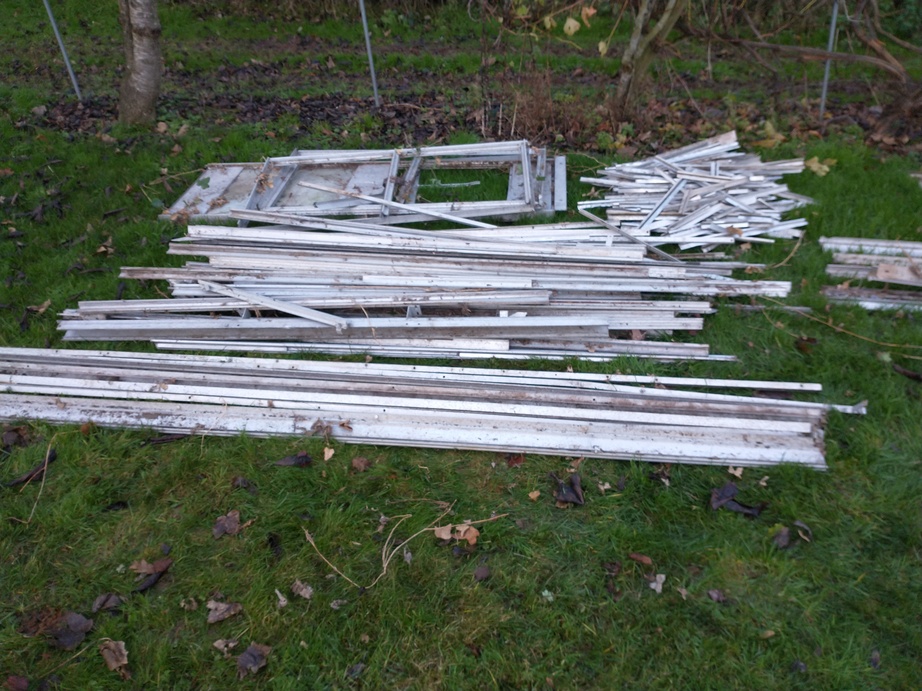 The first is, I think, an 8’x6′ frame which appears in passable condition once all the ivy is cleared off it. I’m thinking it might be a little small for what I want though, and at the back of my head I have a plan for an experiment that might be a better use for it.

The second I’m really not sure about without sorting though all the parts. There appear to be seven rails that are ten feet long, plus a ridge of similar length, perhaps suggesting that it is a 10’x10′ model. It only appears to have a single door however, and most models that size that I’ve seen have two, so it may just be 10’x8′. I think I may need to assemble some of it to get a clearer idea of what is going on. Even if it is the smaller size I think that will be acceptable for what I’m planning. With the larger size I could have three beds 60cm wide with two 60cm paths between them which would be a nice balance of sizes. With the smaller model I’d probably have to go for something like two 90cm beds with a single 60cm path down the middle, though I could perhaps make the beds a little narrower and take another 10cm for the path.

Anyhow, the next stage is definitely to put some of the larger one together and find out exactly what I have.

This entry was posted in Smallholding, Veg plot and tagged greenhouse, no dig. Bookmark the permalink.