Braving the rather chilly northerly wind today I sorted through all the bits of what I believed to be the 10×10 greenhouse and separated them out into similar parts. After that I could start to decide which pieces went where and lay them out. The ridge was fairly obvious, but deciding which of the straight lengths were roof members and which were the side walls was more tricky. As the roof lights are double width I was expecting to have fewer roof members than for the walls, but that turned out not to be the case. It seems as though the roof lights rest over the top of the roof members rather then sitting between them. Anyhow, I managed to match up marks on the metal to how they must have gone into position originally and I believe I have it the right way around now.

The uprights for the end walls weren’t too hard to identify, nor the rails that form the tops of the side walls and the gutters. After a while I had most of the pieces laid out: 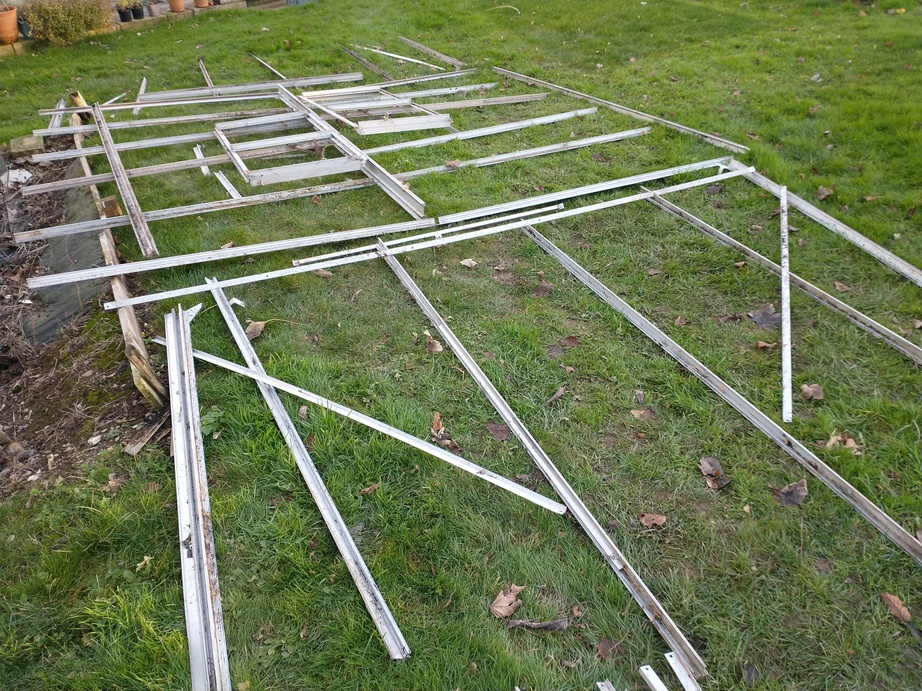 At this point it was clear that it is indeed a 10’x10′ model, which certainly fits the bill very nicely for what I want. We can perhaps have some melons growing up strings and smaller plants growing between them.

There appear to be two sets of diagonal braces of different lengths, four of each. At the moment it’s really not clear where exactly those go. There’s also a long brace that appears to run horizontally across the end that doesn’t have the door in.

What I have left are eighteen (if I recall correctly) pieces that look as though they match the spacing between the uprights but have no fixings, a fanlight window and a few other bits that don’t look like they fit anywhere. I suspect the eighteen pieces may fit towards the bottom of the walls, with a short length of glass below them and the main large pieces of glass above. I looked at the website for the manufacturer (whose nameplate is still on the door: Robinsons) and they still use a similar design. Only I think if that is the case I should have nineteen pieces (five for each side wall, five for the back and four for the front because there’s no need for one in the door opening). I may have left a piece in the barn, perhaps.

The fanlight is an odd one, in that I can’t see anything that looks as though it will act as a hinge without the window falling out as soon as it is opened. That’s going to be something I need to look at when I find out what parts I have left over I think.

I also have a louvred vent, but that looks as though it could be fitted in pretty much anywhere as it is clearly intended to bolt into the frame. Opposite the door might be the obvious choice.

Tomorrow doesn’t exactly look like a great day weather-wise with rain forecast for most of the morning and cold northerly winds in the afternoon so I may well pass up on the opportunity to attempt some assembly, but it would be great if I could make a start this weekend.

This entry was posted in Smallholding, Veg plot and tagged greenhouse, no dig. Bookmark the permalink.