I really need to free up some space in the greenhouse now, and I should really have started transplanting my onion seedlings last weekend but the weather was just too bad, so today I took the Red Baron seedlings out of the greenhouse and started planting them up.

I planted four seeds to a cell in the module trays, but not every seed came up, so I combined some of the ones with fewer than four seedlings and planted them in the same place. Next year I think I’ll perhaps plant five or six seeds per cell and thin them in the spring using the excess as salad onions.

The clumps of onions are 25cm apart each way to allow space for each plant in the clump. I had to do a bit of weeding as I was planting. I suspect that’s because I spread the compost so early — seeds from weeds around the garden have spread on top of the compost and started to grow. There were also a lot of sycamore seeds to be cleaned up. I suspect I’m going to have quite a few sycamore seedlings to pull up next spring.

I also planted garlic today. I was half-tempted to plant small groups of cloves in different places in the plot to try to avoid rust spreading between them, but in the end I decided it would be easier for this year to plant them all together. I did however try to keep them away from the raspberry canes, some of which showed spots of rust this year.

The forecast was for rain this afternoon and I thought I’d leave that to water them in, but whilst we had some very dark grey cloud there was no rain, so I’ll probably water them in tomorrow. 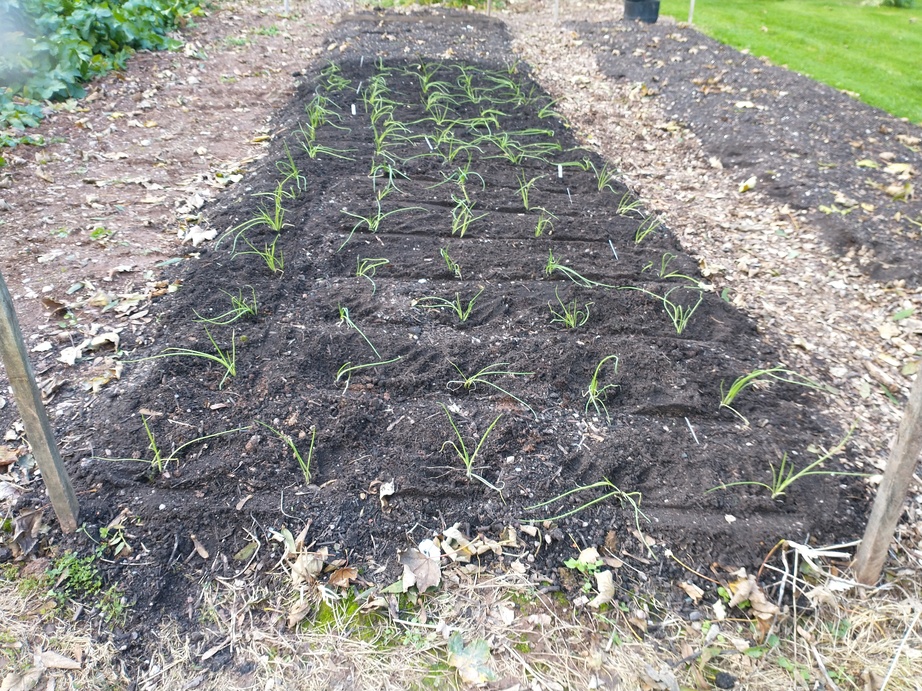 This entry was posted in Smallholding, Veg plot and tagged garlic, no dig, onions. Bookmark the permalink.