Baby steps around the Crescent

So, this is a first pass at processing my data from the Crescent. Something of a motley collection of files, with five hours of Ha, four hours 45 mins of OIII, three hours of luminance, one hour 45 minutes of each of red and green and an hour of blue, all as fifteen minute subs, using my Atik 314L+ and 80ED. There was more blue, but it was awful so I threw it away, and in the end I didn’t use the luminance data (which is what I captured first). So, this is actually HaR for the red channel, OIIIG for the green and straight blue, reusing the HaR as luminance, totalling fourteen hours and 15 minutes integration time, scaled to 50%. 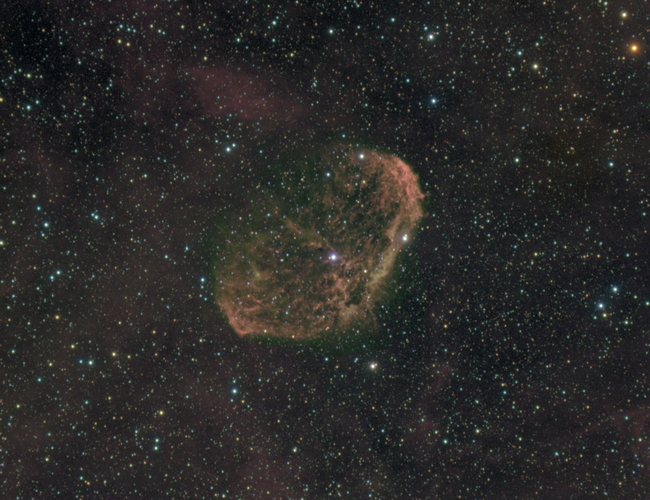 I’m not exactly unhappy with it, but not entirely happy either.

There’s no sharpening and I think I need to get my head around that. I did try some deconvolution, but I wasn’t happy with the results. I’m wondering if I should perhaps have combined the OIII data with the blue channel as well as the green. I think there’s more there than really shows up and perhaps that would make it stand out a little better. At the moment I think the green shell looks like an artefact when I’m pretty sure it’s genuine data.

It would be nice to have the stars a little better controlled, too. Sharpening might help with that, I guess, but it’s something else to work on.