A little delayed, the foam floor tiles for the scope room arrived today. I couldn’t just leave them sitting there so I spent a good half hour just playing with arrangements to try to minimise the cuts around the piers. I even thought about offsetting rows from each other, but the edges of the tiles are effectively “keyed”, so that isn’t possible. In the end I came up with something that meant two of the three piers were fairly straightforward to work around. The last requires a hole to be cut from the middle of a tile, or I accept that there will be at least a couple of joins that aren’t keyed together.

A couple of hours or so later, here’s what I have: 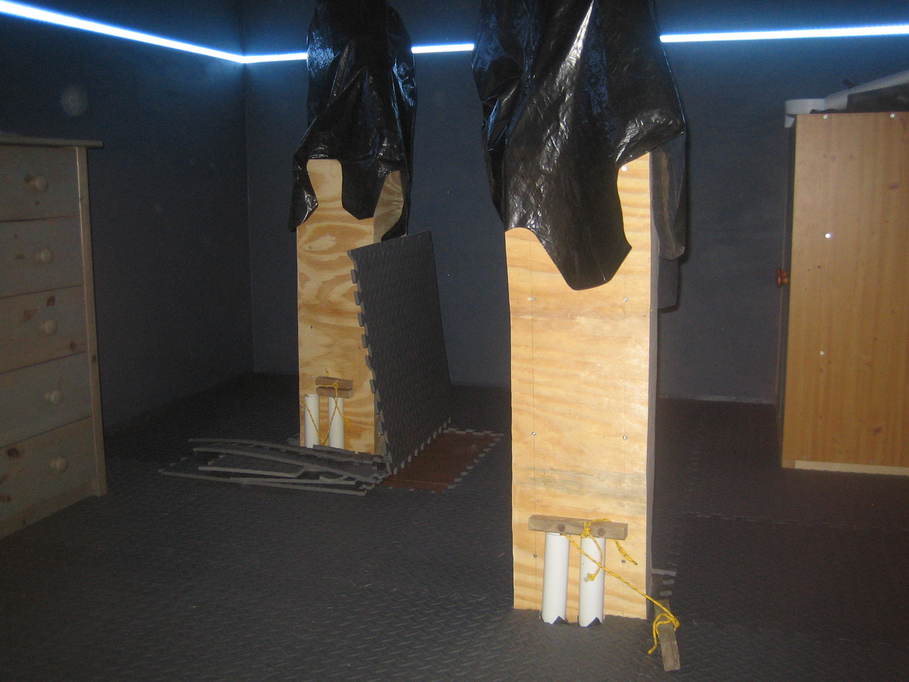 That last tile standing up is the awkward one to fit around the pier and it is the last one I have. There is no room for error. The waste (from two dozen tiles) is what’s lying on the floor. In fact that’s not entirely all waste, as I have a couple of little bits still to fit around the trunking and on the right hand side of the closer pier. It was 10pm and I was feeling a little tired, so I decided I’d leave the complicated bit until tomorrow.

Overall I’m very pleased with them. They’re comfortable and warm underfoot (I was working barefoot again) and very easy to work with. They cut very easily with a sharp knife and can be marked with a pencil when measuring them up. I was a little confused initially by the fact that the edging pieces didn’t all match. They are one of two shapes and won’t fit along an edge together. It’s necessary to stick with one of the edges or cut a little piece off the second so it matches. Hardly a big problem. They were really quite smelly when I opened the packaging too, but either that got better during the course of the evening or I got used to it 🙂

I have cut the tiles to fit a little more snugly than has been recommended to me. As I don’t really know how much expansion there will be over the area I have I decided I’d leave a small gap and if I need to take off a little more that won’t be a problem.

Also arriving today were the “feet” for the posts to support the ends of the roof rails. They’re basically a U-shaped bit of galvanised steel plate to hold the end of the post with a short section of rebar (also galvanised) welded to the bottom. The rebar just goes into a bit of concrete in a hole in the ground. I’ll take a photo when I get around to fitting them. My cup truly runneth over as that wasn’t even the end of it. A new (to me) PSU arrived to replace my old Maplin XM21X that died a while back.

I was hoping to get the power supply plugged into a mount and sort out a telescope to do a little lunar viewing tonight and perhaps even some imaging, but tiredness has caught up with me a bit. Saturday after next is the first anniversary of breaking ground on this project though, so I’d really like to have an opportunity to use it by then.