I’m actually expecting it to take somewhat longer to get this one off the ground, but over the weekend I picked up the first component for this project. The idea is to build a greenhouse that will stay warmer than would otherwise be the case during the colder half of the year with a view to extending the season for tomatoes, keeping peppers (particularly chiles) alive over winter and perhaps also providing a home for our pineapple plant(s).

To achieve that I intend to make three modifications to the greenhouse itself. The first is to replace the north (or slightly west of north, in my case) wall with an “extension” that will be home to a wall of black containers full of water. I have a fair number of 25 litre “jugs” that originally contained Sodium Hypochlorate and I think I can probably fit three vertically for every foot in length (greenhouses are still measured in feet, it seems) of the greenhouse wall. Quite how many that will end up being, I’ll come to in a moment. The idea here being that sunlight entering the greenhouse from the south will warm the water during the day and that heat will then be released back into the greenhouse as it cools overnight.

The second modification will be to replace the lower half of the north-east wall by the back wall of two compost bins (located outside the greenhouse) with a footprint of about 1.2m x 90cm each. This wall will be made of some sort of mesh with holes around 25mm big, whilst the other walls and roof of the compost bins will be timber, and possibly insulated. The intention here is that some of the heat generated by the compost will escape into the greenhouse. I’m aware that some people use a heap inside the greenhouse to provide heat (I believe fresh horse manure is considered a good choice), but that does mean giving up growing space and needs a door large enough to be able to barrow manure in and out (probably a double door, in fact). The obvious benefits of the heap inside are that all escaping heat warms the greenhouse, and it can be used to provide warmth for germinating seedlings too. If I had a sufficiently large greenhouse with double doors I might well be tempted to go that route. The compost material itself will be all of our kitchen waste, plus the contents of our compost toilet once I get around to building it.

The last modification is perhaps the most tricky. My inspiration in this instance comes from a television programme broadcast perhaps fifteen years ago called “It’s Not Easy Being Green”, in which a trench was dug inside the greenhouse and filled with small pieces of broken glass. A solar-powered PC fan was then used to blow air from the top of the greenhouse structure down a pipe into the glass, with the glass giving up the heat it had stored overnight.

In the case of the INEBG heat store, I suspect that it really didn’t work that well, but it has led me to discover that “earth batteries” are a thing, and to a number of different methods for achieving the same ends that are likely to work. My favoured method at the moment is to use solar powered fans to blow air recovered from the top of the greenhouse structure into slotted pipes (such as are used for field drains) that are buried in the ground and then exit back into the greenhouse, the idea being that during the day the warm air heats the soil around the pipes, and at night the air is heated by the soil as it is cycled back into the greenhouse.

Ideally I think I’d like to have a load of sensors plugged into something like a Raspberry Pi to monitor the temperatures and so on, but I’ll have to see how that goes.

So, over the weekend I collected the mostly dismantled parts of a 10’x8′ greenhouse that was offered for free by someone local. It’s quite old I think and needs some TLC in places, but it will be my starting point. Judging by the longer pieces, it has a fairly solid aluminium base along with the frame. 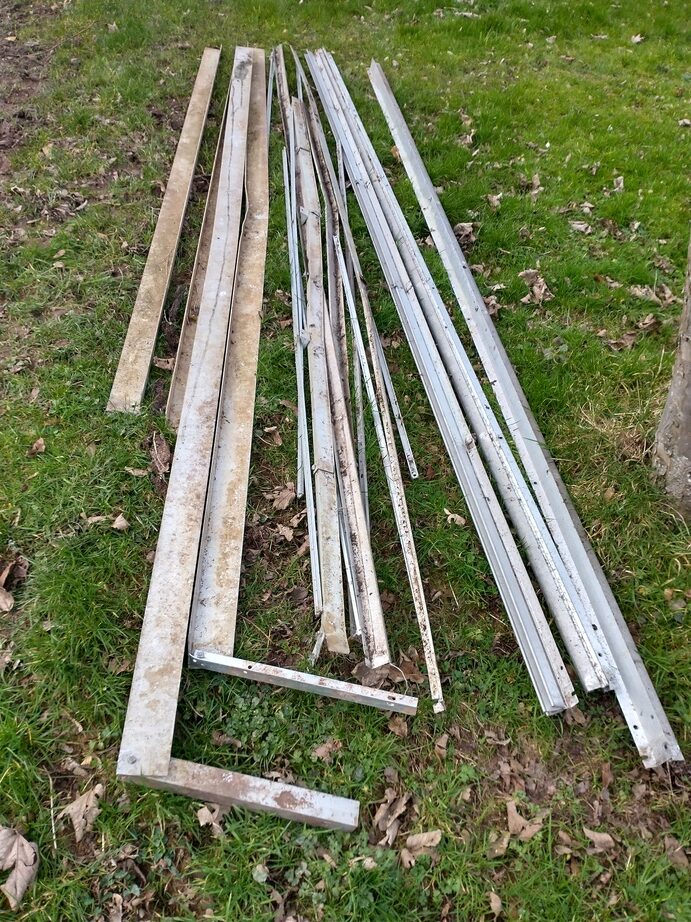 And here’s the rest, with some of the strangest window openers I’ve seen in a greenhouse. 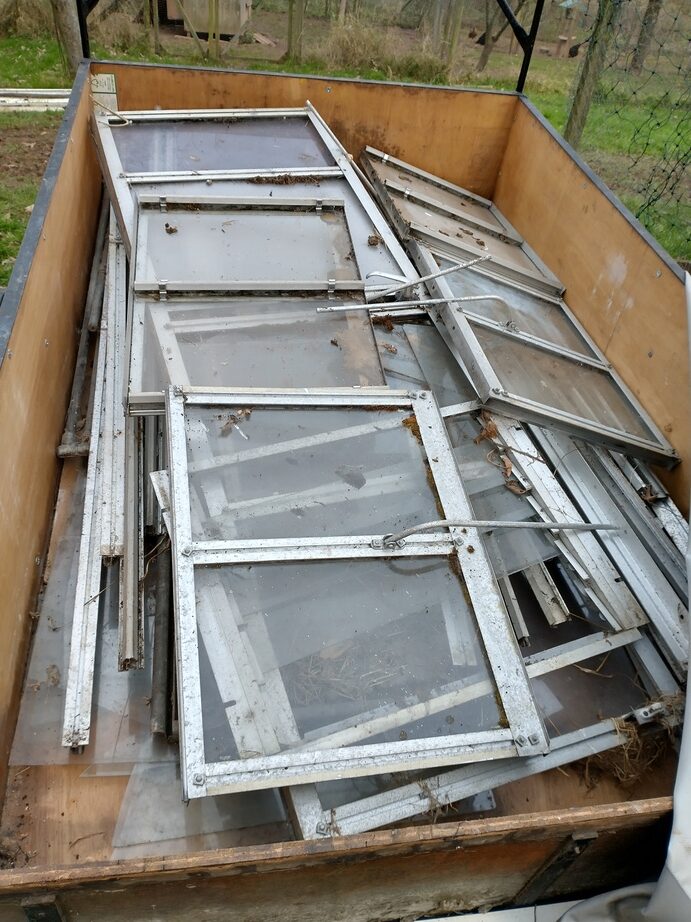 And so to the issue of the number of water containers… The frame is 10′ long, suggesting that I could manage a wall of 30 containers containing 750 litres of water in total. However, I also have what I believe is a complete set of parts for an 8’x8′ greenhouse and I’m wondering if I can perhaps fit the two together to make a structure anything up to 18′ long. The space I intend to use is about 24′ wide, but I need some of that space for the compost bins and working space around them, and obviously I’ll need room to get in through the door in the end opposite the compost bins, so 16′ seems the largest reasonable maximum length unless I’m going to do a lot more faffing about or site the greenhouse elsewhere.

This entry was posted in Projects, Smallholding, Veg plot and tagged solar greenhouse. Bookmark the permalink.